Edward Snowden has taken $1.2m in speaking fees in exile, US filing says 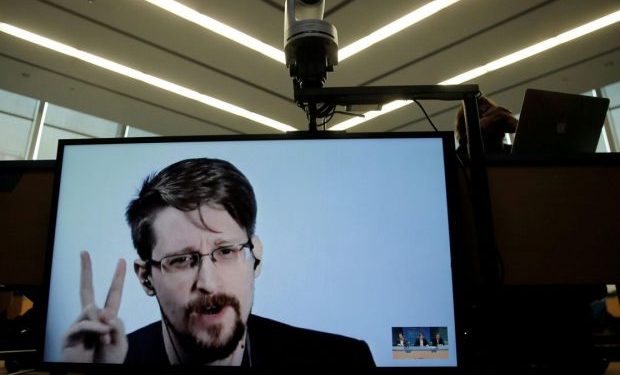 Whistleblower Edward Snowden has earned more than $1.2m in speaking fees since he leaked confidential US material to outlets including the Guardian and went into exile in Moscow, according to a filing by the US justice department in court in Massachusetts.

The federal government is seeking to strip the former National Security Agency contractor, whom Donald Trump last week suggested he may pardon, of profits earned since his disclosures of US surveillance programs in June 2013.

As well as speaking fees, Snowden released a book, Permanent Record, in September 2019. His right to an undisclosed advance on the book has not been challenged by the US government, Politico reported, but it does want to seize its profits.

Snowden’s speaking fees, as listed by the government, cover a total of 67 engagements from 2015 to May this year.

While seeking to interfere with Snowden’s livelihood, the US government has repeatedly demanded that he return to face charges under the Espionage Act. In 2014, John Kerry, secretary of state under Barack Obama, accused Snowden of betrayal and said “he should man up and come back to the US”.

Legal analysts have pointed out that the charges against Snowden make it impossible for him to argue that his disclosures had served the common good.

Snowden revealed that the US government was engaged in illegal dragnet surveillance of telecoms and internet communications including by US persons, conduct the government had explicitly denied and continued to deny even as Snowden described how the programs worked.

“The laws under which Snowden is charged don’t distinguish between sharing information with the press in the public interest, and selling secrets to a foreign enemy,” Ben Wizner, a lawyer with the American Civil Liberties Union and a Snowden legal adviser, told the Guardian in 2014.

“The laws would not provide him any opportunity to say that the information never should have been withheld from the public in the first place.

“And the fact that the disclosures have led to the highest journalism rewards” – the Guardian shared a Pulitzer Prize for its work on the story – “have led to historic reforms in the US and around the world, all of that would be irrelevant in a prosecution under the espionage laws in the United States.”

Snowden could face an untold number of additional charges if he returned to the US.

“He could be charged for each of the documents that has been published,” Wizner said. “The exposure that he faces is virtually unlimited under this.”

Trump, who has previously called Snowden a traitor and said he should be executed, floated the idea of a pardon last week.

“There are a lot of people that think that he is not being treated fairly,” Trump told the New York Post.

Polling has shown majority support for Snowden among young Americans, for example.

In a statement on Saturday, the ACLU said: “Edward Snowden blew the whistle on illegal government activity kept secret for years, sparking a global debate about the proper limits of government surveillance.

“We’ve said it before and we’ll say it again: Snowden is a patriot and should be pardoned.”