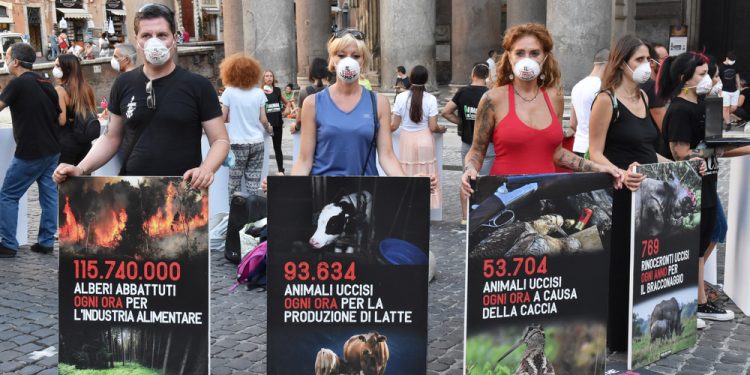 ROME,JULY 10,2020 PANTHEON, PROTEST BY SOME ITALIAN ANIMAL RIGHTS ACTIVISTS AGAINST THE KILLING OF ANIMALS

Brussels (Brussels Morning) The EU Court of Justice (ECJ) backs Belgium’s ban on the slaughter of animals without stunning, causing Jewish and Muslim groups to warn that the move could jeopardise religious freedom, DW reports

According to the ECJ’s ruling on Thursday, EU member states may impose legal bans on stun-free slaughter of animals.

“The principle that an animal should be stunned prior to being killed meets the main objective of the protection of animal welfare,” the court pointed out. According to Jewish and Muslim rules for slaughtering animals, livestock must be conscious when being killed.

An ECJ  statement released before the ruling notes “the effect of this law is, in essence, to prohibit the slaughtering of animals by means of traditional Jewish and Muslim rites and to require that such animals be stunned prior to slaughter in order to reduce their suffering.”

When the Belgian region of Flanders banned stun-free slaughter of animals in 2017, Jewish and Muslim groups objected saying the ban was in violation of their religious freedom and that it would make kosher and halal slaughter impossible. Freedom of religion is one of the fundamental rights enshrined in the Charter of Fundamental Rights of the EU.

In 2002, Germany’s Constitutional Court ruled in that religious ritual slaughter was permissible but only under strict conditions and in individual cases.

In September this year, an ECJ legal expert appealed for an exception to be made in order to allow kosher and halal slaughter, but was unable to secure an opinion that was binding. “The people who kill animals while hunting or fishing or controlling harmful organisms, on the one hand, and the people who kill animals according to special slaughter methods prescribed by the customs of religious worship, on the other hand, are treated differently without reasonable justification,” the expert contended.

ECJ points out the requirement for stunning animals before slaughter limits only one aspect of religious practice, rather than prohibits these practices entirely, Reuters reports.Israel’s Ambassador to Belgium Emmanuel Nahshon described the ECJ ruling as catastrophic and claimed that some Europeans lack tolerance.