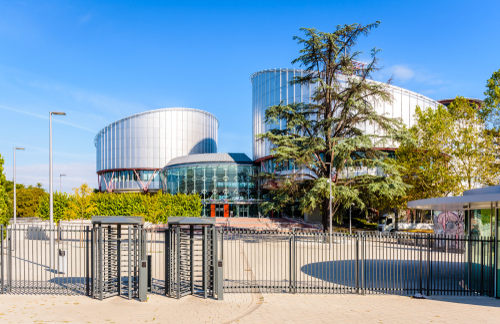 Strasbourg, France - September 13, 2019: The access to the building of the European Court of Human Rights, built in 1995 after architect Richard Rogers, is secured by a fence and security turnstiles.

Belgium (Brussels Morning Newspaper) The European Court of Human Rights (ECHR) issued a last-minute injunction ordering Britain to halt its plans of transferring an illegal migrant to Rwanda, with migrant charities claiming the decision can now be applied to all migrants slated for such deportation.

The UK Government originally struck a 120-million-pound deal with Rwanda to fly some of the migrants which have illegally crossed the British Channel to the African country, claiming the move would “smash the business model” of people smugglers and dramatically reduce the flow of dangerous cross-Channel trips.

This plan was met with horror by the liberal and left-wing opposition, as well by international rights organisations and charities dedicated to aiding migrants, all of which have denounced the UK Government’s scheme as inhumane.

With the first flight carrying migrants to Rwanda scheduled for Tuesday, at least 30 migrants managed to contest the measure individually in courts, arguing against deportation either on health or human rights grounds. On Tuesday morning, a smaller number of migrants remained scheduled for deportation, when ECHR announced it had granted an injunction relating to an Iraqi migrant, stopping his deportation.

The ECHR ruling stressed that “the applicant should not be removed until the expiry of a period of three weeks following the delivery of the final domestic decision in the ongoing judicial review proceedings,” indicating that the same principle would hold for all other migrants. The Government scheme is currently undergoing judicial review at the High Court in London, which is expected to rule on the legality of the Government’s plan sometime in July.

A representative of the Care4Calais charity told Reuters that the ECHR ruling now means the remaining migrants can make similar claims – demanding the deportations be halted until a final judicial review was concluded.

British Prime Minister Boris Johnson had previously criticised the “leftie” lawyers for their attempts to block the Government’s Rwanda deportation scheme, saying they were “undermining attempts to support safe routes for asylum seekers”.