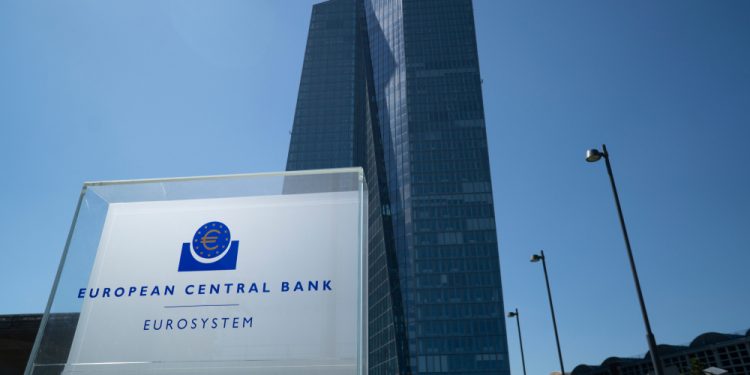 Close up of the sign at the European Central Bank in Frankfurt Germany where monetary policy for Europe and the Eurozone is made.

Brussels (Brussels Morning) The European Central Bank (ECB) is to release more stimulus later this week to help businesses stay afloat until the economy recovers from the coronavirus crisis and to help governments cushion the blow as the second wave of pandemic infections hits Europe, AP reported yesterday, Tuesday.

The ECB could up its bond purchases some 500 billion euro or more, meaning that it would soak up a significant portion of the new debt that EU member states are issuing, a move that would decrease the risk of a new debt crisis overwhelming the eurozone.

Frederik Ducrozet and Nadia Gharbi of the Pictet Wealth Management point out that, if the ECB ups its pandemic purchases as planned, the bank “will continue to absorb a very large part of gross debt issuance from euro area states.”

Chiara Cremonesi and Francesco Maria Di Bella, analysts at UniCredit, predict that the ECB will remain very active in the bond market, suggesting that it could buy an amount comparable to “the entire new net issuance in 2021.” The two expect eurozone countries to issue about 1.3 trillion euro in medium- and long-term bonds in 2021 in order to cover existing debts and deficits.

They note that the ECB could extend the duration of its purchases to the end of next year or even mid-2022, mindful that current plans are to run the purchases until mid-2021 or until the end of the coronavirus crisis, whichever comes first. The ECB could also increase its cheap, long-term loans to banks so as to maintain solvency and ensure they can continue supporting businesses.

The money from EU’s planned 750-billion euro recovery fund is expected to start flowing next year as part of the bloc’s long-term budget. However, Hungary and Poland are objecting to the bundle that comprises the recovery fund and the long-term budget because it also includes the proposed governance clause, linking access to EU funds with adherence to the bloc’s democratic standards.

Should the dispute with Hungary and Poland be resolved, Capital Economics consultancy economist Melanie Debono points out that EU aid would support growth without any significant effect on debt dynamics. For now, she concludes, the ECB will have to ensure fiscal sustainability.