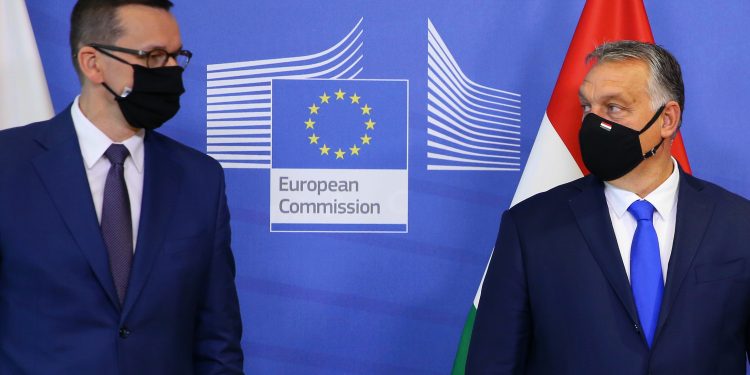 The two EU member states, objecting to the planned linkage of access to EU funds with adherence to the bloc’s rule of law democratic standards, used their veto powers to prevent adoption of the proposed mechanism. Von der Leyen‘s proposal, which offers one way the EU could break the deadlock,  has been discussed informally by the bloc’s officials.

In an address to the EU Parliament, von der Leyen claimed the proposed conditionality rule would be applied solely to safeguard EU budget funds as a means of preventing EU member states from threatening the EU budget. It was difficult, she said, to imagine anyone in the EU could have anything against such a move.

Despite von der Leyen’s assurances, Hungary and Poland fear they are at risk of losing access to EU funds since they are under investigation for infringing the independence of the judiciary, the media and NGOs. Von der Leyen reiterated that, if the two member states have any doubts, they should bring their case before the ECJ and contest the new rules there.

Millions of EU citizens are in dire need of help, she stressed, pointing to the ECJ as the place to settle differences of opinion about the regulations.

Hungary and Poland would gain from resolving the impasse as both are net beneficiaries of the EU budget, in need of EU funding to help weather the coronavirus crisis and are among member states slated to receive the highest amounts per capita from EU funds.

Under Germany’s EU presidency, the bloc has wrapped the 1.1-trillion euro EU budget, the 750-billion recovery fund and the rule of law clause into one package. As a consequence, the vetos cast by Hungary and Poland block both the long-term budget and the recovery fund.

Hungary’s Prime Minister Viktor Orbán pointed out that there was no need for the three items to be linked, claiming that the deadlock could be resolved easily were each issue dealt with separately. He noted that separating the three items would allow the bloc to go ahead with the financial plan immediately, leaving it to deal with the rule of law clause later.