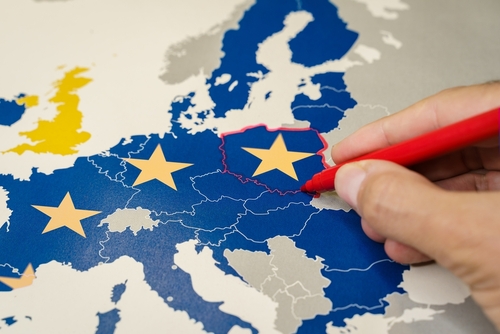 Hand drawing a red line between Poland and the rest of EU, Polexit concept.

Brussels (Brussels Morning) The European Commission will insist that Poland pays the fines levied by the EU courts for failing to dismantle its controversial disciplinary chamber for judges, part of its judiciary reform that was panned by Brussels for jeopardising judicial independence.

Speaking at a press conference on Tuesday, an EC spokesperson confirmed that the Commission had received a written explanation from Poland as to why it has not complied as yet with court orders or started paying the fines.

Poland was given a deadline of 11 January to provide a formal explanation and to inform the Commission as to when and how it plans to comply and dismantle the Disciplinary Chamber of Poland’s Supreme Court.

Citing sources within the Commission, Reuters reports that the letter had arrived but being written in Polish would have to be translated before the Commission could make a formal response. If Warsaw’s response fails to satisfy the Commission, the most likely scenario is a reply that will include an invoice for Poland, with a 45-day deadline for payment.

The European Court of Justice (ECJ) ruled against Warsaw in late October last year, ordering Poland to pay a 1 million euro per day fine for each day that the disciplinary chamber continues its work. Poland previously had pledged that it would suspend the chamber, but later engaged in what appears to be a stalling tactic, claiming it would dissolve the chamber as part of a broader judiciary reform, while giving no indication as to when that might take place.

Poland’s Deputy Justice Minister, Sebastian Kaleta, accused the ECJ of engaging in “usurpation and blackmail”, while the country’s Prime Minister Mateusz Morawiecki asserted that some European institutions were “overstepping their bounds”. Given Warsaw’s refusal to pay, the fine is likely grow to more than 70 million euro by the time the EC invoice arrives.

The threat of Islamic terrorism is still real, and Europe must act accordingly