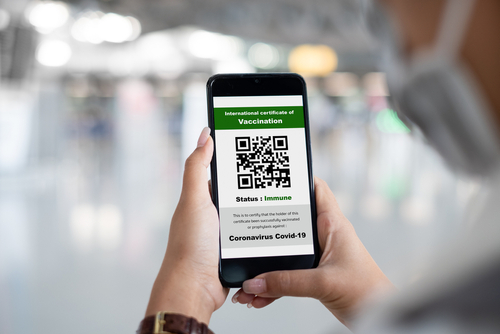 Traveler shows health passport of vaccination certification on phone at airport, to certicy that have been vaccinated of coronavirus covid-19

Belgium, (Brussels Morning Newspaper) The European Commission yesterday proposed that the vaccine pass scheme remain in effect until the end of June next year.

While the EC pointed out that extending the scheme ensures that travellers can continue to use their vaccine passes, it has also proposed amending the applicable rules. Since demand for COVID-19 tests remains high, it has recommended the inclusion of “laboratory-based antigen tests among the types of tests for which a test certificate can be issued.”

The EC also suggested that vaccine passes should be issued to people who participate in trials for COVID-19 vaccines, a move that would encourage “continued development and study of vaccines against COVID-19.”

Considering that EU-wide rules neither force nor prohibit member states from using vaccine passes domestically for purpose of restricting access to venues or events, the Commission suggested that those that do impose such restrictions should accept the vaccine pass for those purposes.

The EC called on the EU Parliament and the EU Council to adopt the proposal quickly, since the EU vaccine pass scheme expires on 30 June this year.

European Commissioner for Justice Didier Reynders asserted that the vaccine pass “has proven an effective tool to facilitate safe and free travel.”

Stella Kyriakides, European Commissioner for Health and Food Safety, claimed the vaccine pass “has facilitated safe free movement and travel in times of great uncertainty.” She welcomed the fact that “our citizens have embraced it”, their lives having been made “easier”, and declared that the EC now wants “to bring our certificate up to date with the latest scientific developments and epidemiological changes.”

European Commissioner for the Internal Market Thierry Breton described the pass as an “important enabler of free movement and travel even in times of uncertainty.”