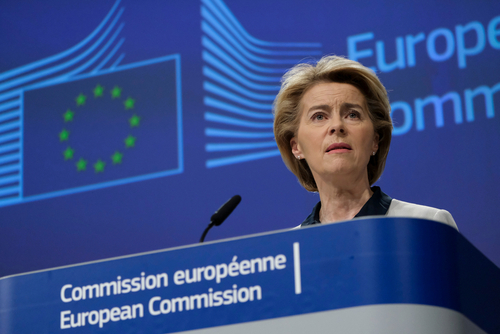 EC President Ursula von der Leyen stressed the importance of investing more in the green push under the EU Global Gateway strategy, the EC noted in a statement on Saturday.

Von der Leyen noted that the EC is committed to providing aid to its most vulnerable partners, stressing that the Commission pledged 715 million euro for the fight against AIDS, malaria and tuberculosis.

She added that the body set aside 600 million euro for the fight against the food crisis in Africa, Pacific and the Caribbean, while 45 million will go towards women’s rights.

“Team Europe is answering the call from citizens to address food security, to take care of our health and the health of our planet,” she stated and added “after we joined forces to fight the pandemic, we must now come together to end other deadly diseases, tackle poverty and bring equity.”

Von der Leyen pointed out that the body decided to make unprecedented investments amid the crisis, stressing that the EC wants to “play its role in the global green transition.”

Jutta Urpilainen, European Commissioner for International Partnerships, added “we must unite to put the Sustainable Development Goals back on track.”

“With these new announcements today, we call on the international community to join us in investing more, more equitably and more efficiently in people and planet,” she concluded.

The EC pointed out that it will spend 600 million euro on humanitarian aid and food production “in the most vulnerable partner countries in Africa, the Caribbean and Pacific.”

The body stressed that countries in Central and West Africa will receive 160.5 million euro, followed by East Africa and the African Great Lakes region with 146 million, Southern Africa with 76.5 million, the Caribbean with 36.5 million and the Pacific with 10 million.

The EC stressed that it doubled its pledge for global biodiversity for the period between 2021 and 2027, which stands at 7 billion euro. It pointed out that the pledge comes ahead of the UN Biodiversity Conference in Montreal.