EC calls for return of democracy in Myanmar 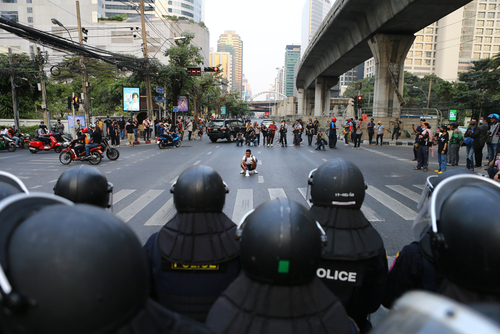 2021,February,1,Bangkok,Thailand,NLD supporters in Bangkok are protesting outside Myanmar Embassy against the military coup 17.06 Police dissolve rallies in front of the Myanmar embassy Initially

Belgium, (Brussels Morning Newspaper) The EC has issued a declaration calling for a return to democracy in Myanmar. On Monday, Josep Borrell, High Representative of the EU for Foreign Affairs and Security Policy, pointed out in a statement how the military had overthrown the elected government in Myanmar at the start of February last year.

Borrell declared that the EU has stood with the people of Myanmar since the onset of the crisis and that it supports a return to democracy.

“The EU is deeply concerned by the continuing escalation of violence and the evolution towards a protracted conflict with regional implications”, he said, in expressing concern about the grave deterioration of the situation there since the coup.

A significant part of Myanmar’s population remains in a difficult situation, facing violence, displacement, poverty, and food shortages, he warned.

“More than 1,500 people have been killed, over 8,600 are currently under detention and 80 people sentenced to death”, Borrell said. There have been “over 400,000 newly displaced people since the military take-over… in addition to almost one million Myanmar refugees in neighboring countries”, he added

Also, the EU “reiterates its firm demand for the immediate and unconditional release of all prisoners arbitrarily detained in relation to the coup” and for the “return to power of democratically elected leaders”, he added.

Urging an end to hostilities, Borrell said the military authorities should allow unhindered and safe humanitarian access to people in need across the country.

“The EU will continue to provide humanitarian assistance, in accordance with the principles of humanity, neutrality, impartiality, and independence and reiterates its call for the full and immediate respect of international humanitarian law”, he stated. If the situation in the country does not improve rapidly, the EU is prepared to slap Myanmar’s armed forces with additional sanctions, he promised.