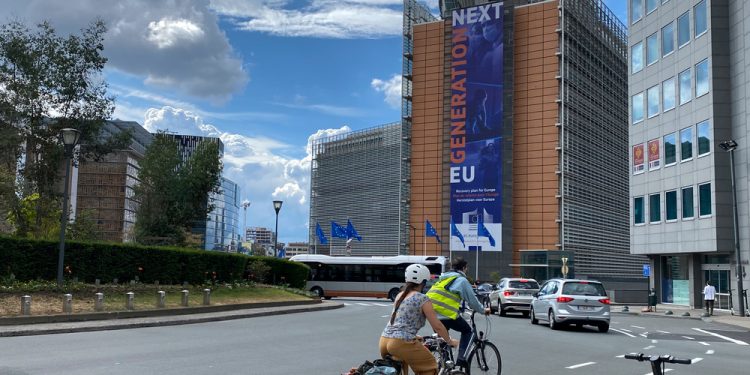 A rider passes with her bike in front of EU Headquarters in Brussels, Belgium

The body pointed out in a statement released on Wednesday that the LIFE programme is “at the heart of the European Green Deal” and will help the bloc to become carbon neutral by 2050.

The newly approved projects are aimed at supporting circular economy, nature restoration and biodiversity, and will help the bloc to transition away from fossil fuels.

They are divided in four categories – circular economy, nature and biodiversity, climate change mitigation and green transition. The EC pointed out that the projects will mobilise investments worth more than 562 million euro and added that most EU member states will benefit from the projects.

Virginijus Sinkevičius, European Commissioner for the Environment, Oceans and Fisheries, stressed “the triple crises of climate change, biodiversity loss and pollution must be tackled together.”

He called on all countries to support plans to strengthen the green push at the coming UN biodiversity summit and noted that the EU “already started the work in that direction.”

Sinkevičius expressed hope that LIFE projects will “create solutions… and bring about a profound societal and economic transformation.”

Frans Timmermans, European Commissioner for Climate Action, warned that “extreme heat, droughts and floods can damage nature and hamper its ability to shield us from the worst impacts of climate change.”

According to Timmermans, “LIFE projects make it possible to move from ambition to action, boosting decarbonisation and bringing real change on the ground.”

The Commission noted that one of the projects will improve biodiversity management in three EU cities by restoring habitats and engaging residents to take part in restoration plans.

Another project will promote the use of electric and hybrid tractors in Spain to cut consumption of fossil fuels by nearly 50%. A project in Italy will invest energy and resources to collect, sort and recycle outdoor footwear to make new footwear.

A project in Cyprus and Greece will seek to demonstrate the effectiveness of methods aimed at lowering risks associated with desertification, while a project in Finland and Latvia is aimed at restoration of mires and implementation of climate change mitigation measures.

The EC concluded that newly approved projects will “contribute to the implementation of the EU’s Climate Law and Adaptation to Climate Change Strategy.”