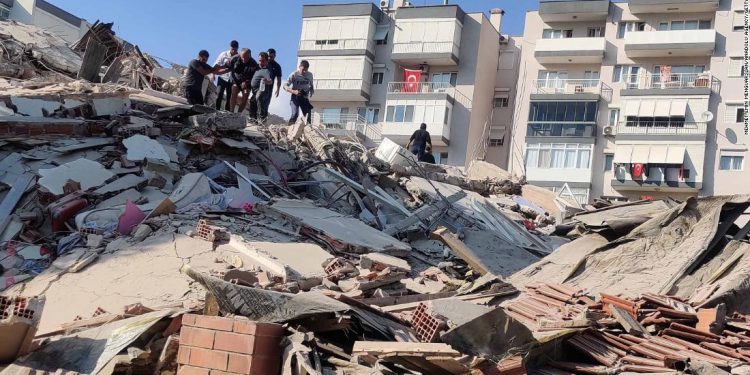 Brussels, (Brussels Morning) An earthquake off the Greek island of Samos in the Aegean Sea struck Greece and Turkey on Friday afternoon, Kathimerini reports. European and American seismological agencies registered the earthquake at a magnitude of 7 Richter.

At least 27 people were killed in both countries, with more than 800 injured, BBC reported Saturday. The earthquake struck some 14 kilometres off Samos at a depth of about 21 kilometres, setting off tidal waves that hit islands and coastal areas in Turkey and Greece.

Most of the damage occurred in the Turkish city of İzmir, with Greek Prime Minister Kyriakos Mitsotakis offering his condolences to Turkish President Recep Erdoğan.

“Whatever our differences, these are times when our people need to stand together”, Mitsotakis wrote on Twitter, with Erdoğan responding that Turkey, too, was ready to help Greece heal its wounds. Erdoğan concluded that “solidarity between neighbours in difficult times was more valuable than many things in life”.

Authorities in İzmir have erected tents to house some 2,000 people fearing that more buildings could collapse. Close to 4,000 rescue workers are deployed, according to the Turkish state-run Anadolu Agency, with back up from 20 dogs and 475 vehicles. Overall efforts have been hampered by 33 aftershocks more powerful than magnitude 4.

On Saturday, the death toll reached 37, two of which were on Samos and the other 35 in Turkey, Reuters reports. Mayor of İzmir Tunç Soyer stated that rescue efforts were continuing, with an estimated 180 people trapped under collapsed buildings. In a national TV address, President Erdoğan said that 885 people were injured. Turkey’s Minister of Health Fahrettin Koca noted that 243 people are being treated in hospitals, eight of them in critical condition.

According to a Reuters report, the death toll rose to 51 on Sunday.

Relations between Greece and Turkey have been deteriorating in part because of Ankara’s continuing hydrocarbons exploration in contested waters in the Eastern Mediterranean. The sympathetic exchanges between Mitsotakis and Erdoğan following the earthquake represent a welcome and positive change.

The 1999 earthquake in İzmit near Istanbul, which resulted in the deaths of some 17,000 people, saw cooperation between the two countries improve as relations between Greece and Turkey warned for a period.