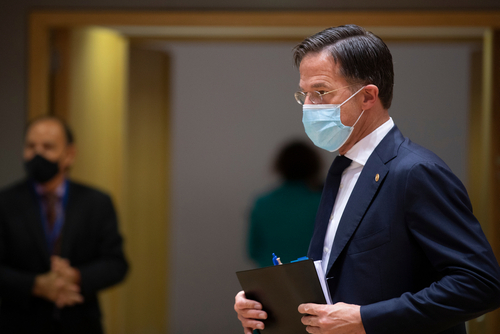 Brussels (Brussels Morning) Dutch Prime Minister Mark Rutte faces an unexpected no-confidence vote following accusations that he lied to the press. The allegation occurred just weeks after he emerged as a relative winner in early parliamentary elections prompted by the resignation of his previous cabinet, Deutsche Welle reports.

Rutte faced a stall in talks about the formation of a new ruling coalition when two of the representatives tested positive for COVID-19. However, a bigger problem emerged as press photographers snapped a glimpse of notes held by Kajsa Ollongren, of the centrist D66 party, as she was leaving the talks.

Photographs showing Ollongren’s notes include a clearly discernible line that reads“Position Omtzigt. Position elsewhere”. This has been taken to indicate that the future position of the Christian Democrat Appeal (CDA) party’s Peter Omtzigt figured in the discussions.

Omtzigt was previously a vocal critic of the former Rutte cabinet, especially in the wake of the childcare scandal which forced Rutte and his ministers to resign. Now his CDA party is on course to be a part of the ruling coalition.

Last week, Rutte had told the press that he had not discussed Omtzigt in the coalition negotiations. However, notes provided to lawmakers participating in coalition negotiations disproved this claim, prompting the opposition to accuse him of lying. Press and analysts have ascribed meanings ranging from “out of government” to “out of Netherlands” to the use of the word “elsewhere”..

Opposition deputy Geert Wilders of the far-right Freedom Party (VVD) tabled the no-confidence motion against Rutte. If it is passed, it would significantly complicate his efforts to form a new government. “Seek a job elsewhere yourself”, Wilders said, accusing Rutte of lying to the whole country. “We cannot go further with this PM”.

Rutte denied having lied to the press, claiming that he “could not remember” discussing Omtzigt in the coalition negotiations. “I did not lie, I acted honourably and in good conscience”, he told the parliament on Thursday.