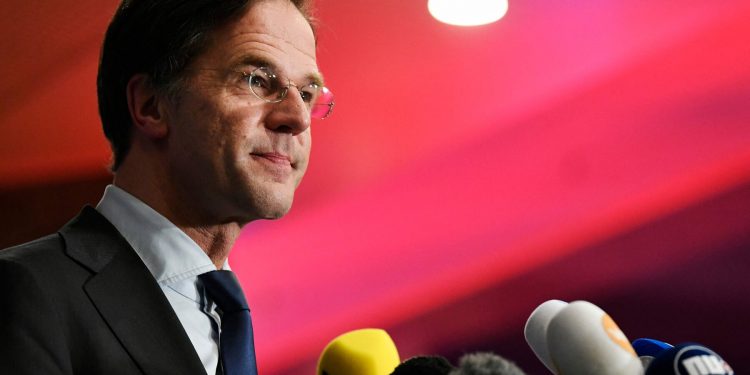 With 88.5% of all votes counted, Rutte’s party should win 35 seats in the 150-member parliament, two more than it held last time out. Early elections were called after Rutte’s entire cabinet resigned following a child welfare benefits scandal, in which thousands of parents were branded as fraudsters because of what turned out to be minor clerical errors.

“The voters of the Netherlands have given my party an overwhelming vote of confidence,” Rutte told reporters. He admitted that “not everything has gone well in the last 10 years” since he first came to power. Now, he emphasized, his main goal, going forward, will be to rebuild the country following the coronavirus pandemic.

Rutte seems set to serve a fourth consecutive term, provided he manages again to form a coalition including at least two other parties. His outgoing coalition partners, the liberal Democrats 66 (D66) party, achieved a surprising surge at the polls to place second, and are likely to secure 24 seats, five more than in the 2017 election.

The Christian Democratic Appeal (CDA), the second largest party in the outgoing coalition, looks set to lose four of the 19 seats it previously held, and will have to take a back seat in the future cabinet. The D66 leader, Sigrid Kaag, is expected tp play the role of kingmaker as the next government takes shape.

It took Rutte’s former government all of 225 days to form a four-party coalition and secure a majority in the parliament. The job might be easier this time, but the VVD, D66 and CDA combination would account for only 74 seats between them according to projections, leaving them in need of the support of at least one more party.

The far-right bloc comes out of the elections with a combined 29 seats. This is the most in history, albeit spread over three parties. At the core is Geert Wilders’ Party for Freedom (PVV), which lost three of its 20 seats to its rivals, the Forum for Democracy (FvD) and its offshoot JA21, which are likely to win eight and four seats, respectively.