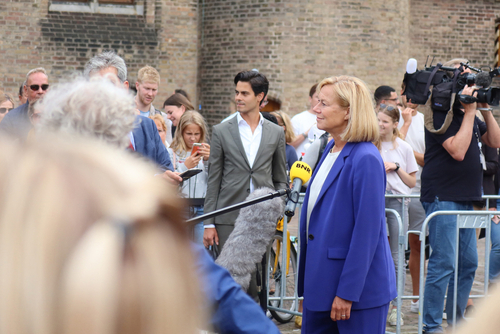 Brussels (Brussels Morning) Dutch Foreign Minister Sigrid Kaag resigned on Thursday, after the parliament voted to condemn her ministry’s handling of the evacuation of Dutch nationals and eligible Afghans from Kabul as the city was about to fall into Taliban hands.

The parliament voted 78 in favour and 72 against to condemn the minister. Kaag, is also the leader of the second largest Dutch party, the centre-left Democrats 66 (D66), which is currently in talks with Prime Minister Mark Rutte about forming a new cabinet following the snap elections in March.

Prior to the fall of Kabul, the Netherlands evacuated more than 1,500 people from Afghanistan, both Dutch and Afghan nationals, but many eligible Afghans were left behind. According to official government figures, at least 22 interpreters who worked with Dutch forces and officials remained in Afghanistan.

What drew additional ire from Dutch MPs was the fact that parliamentary deputies had called for the government to start evacuations months before, which, had it acted, would likely have been timely enough to ensure the withdrawal of all personnel and the evacuation of all civilians.

Kaag conceded that the government “had a blind spot” when it came to assessing how fast the security situation in Afghanistan would deteriorate, but she defended herself by saying that other countries have made similar mistakes.

Following the parliamentary vote, Kaag said as minister in charge  she must “accept the consequences of this judgement”, stressing that her view of democracy says that ministers should go if their policy is disapproved. Defence Minister Ank Bijleveld, in contrast, refused to resign despite also being censured by the parliament on Thursday over the same issue.

PM Rutte called Kaag’s departure from the government a “great loss” to his current caretaker cabinet. Her resignation will likely further complicate coalition talks between Rutte’s centre-right People’s Party (VVD) and D66. Relations have been strained since April when Kaag called on Rutte to resign after he was censured by the parliament for reportedly having lied about coalition talks.