Driving taxis in Greece through COVID 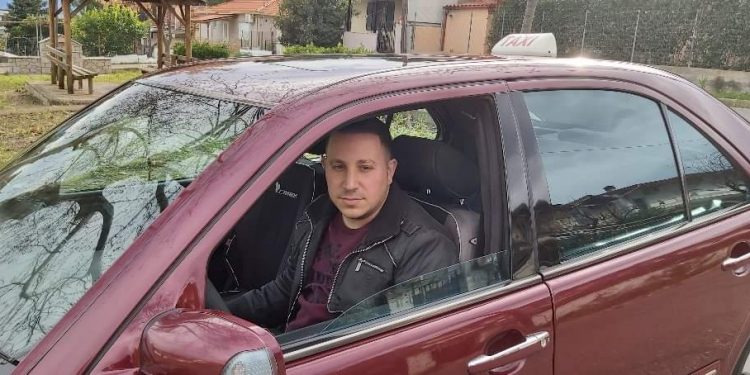 In the launch of Brussels Morning’s new column Round the Bloc, taxi driver Kostas from Lamia, Greece, talks about fears of driving during the coronavirus pandemic and insecurity in the country’s job market.

Lamia (Brussels Morning) “You know I would love to open an office or have my own brand, but the idea of staying unemployed for long or depending on others untill my thirties was unbearable”.

Konstantinos (Kostas) Bakalonis, from Lamia, a city in Greece, is an Urban Planning Engineer who has worked as a taxi driver for the past five years. He inherited his taxi and licence from his father and decided to follow the family tradition after facing challenges finding a job in his field.

After graduating, he completed a mandatory one-year stint in the army, during which he realised the challenges of the job market. At the same time, his sister decided to move to the Netherlands, unwilling to join the long-term unemployed or work for 300 euros a month.

In 2020, the coronavirus pandemic affected him and 90% of taxi drivers in the region.

“During the first wave people were terrified, not even the drivers were working, afraid they would get infected”, he said in a candid interview with Brussels Morning. “The ones that were working with standard clients, a limited portfolio that includes elderly or people with special needs, were able to limit their losses”.

The drivers of the town witnessed a 60-70% annual loss. At the same time, a taxi driver’s compensation was 534 euros a month from the government, not enough for a family to survive.

“During the second wave things are better, but the government was not supportive at all, once more. They gave us 800 euros at the end of December, while the lockdown took place from the beginning of November. There were people that for one and a half months, did not know how they will feed their families and [borrowed] money”.

Many of his colleagues were not even able to get this compensation due to stricter regulations.

“I believe some of them will have to work outside of the code of conduct in order to survive. It is the only way, or they will quit. There is no way they can afford to keep the taxi business running”, he said.

“It is also difficult for a person to drive the taxi all day around, being far from his or her family, that is why many share the taxi with their parents of other family members for extra [jobs]”.

During the lockdown, only one person is allowed in a taxi, the exception being a parent with a child. People are not using taxis, however, even if it the safest way to move around, either due to the higher tariffs or from a general fear of the coronavirus.

“There are professionals that work half-half [with] one taxi. The one that is working during the night will not be able to survive and the ones that are working daytime are not willing to share the burden”.

“In the 22:00-06:00 night shift, there is nothing, two to three taxi cars are waiting for a client. [And] only emergency cases that need transfer to the hospital or to a pharmacy”.

The taxi drivers are following the regulations to survive. Every month, despite the ongoing crisis, they have to pay 280 euros to the state. They also pay a monthly fee for several car checks and controls.

“The drivers are also afraid of the situation, particularly of the virus deniers that are moving [irresponsibly] with taxis.

“Once, there was a couple who I drove to hospital without [their] sharing anything during [the journey]. They were silent, and when we reached the hospital, they told the security personnel that they came for the corona test. The medics tested them in the taxi, did not let them enter the hospital. I was terrified and felt ‘I do not control the situation ongoing in my own car'”.

Lamia’s population is 90,000 and there are 180 drivers. The number of taxis excessive considering there should be one taxi per 1,000 people. Despite the current situation, Kostas hopes for better days in the years to come, rather than having to change his vocation once more. He is still not considering a job in the urban planning field.