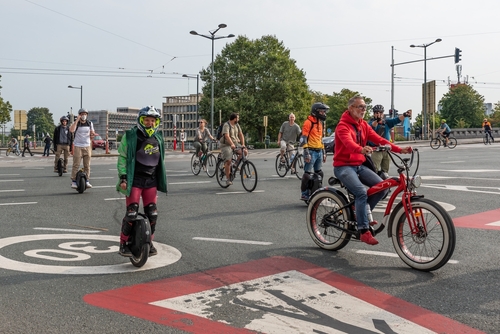 Brussels (Brussels Morning) The offer of shared electric bikes will seriously expand in Brussels with the arrival of Dott’s shared bikes. The operator of electric scooters began last Monday to deploy its shared bikes in the capital.

Dott will deploy 2,000 by the end of the year in the capital, in addition to its 3,000 scooters. Only Villo, with its 5,000 bikes, is now ahead of this rapidly expanding initiative.

At the same price as scooters

Dott’s idea is that its bikes are the same price as its scooters on their app. The basic price is 1 euro to unlock the bike and 20 cents per minute thereafter.

For dialogue with municipal authorities

The company wants to focus its strategy on dialogue with municipalities and product sustainability. This leaves with no question for Dott to work in a territory without the agreement of the municipal authorities and a good understanding of the local specificities. In Brussels, Dott has operated continuously since January 2019, except for the time when it was -18 ° and the service was suspended.

Remarkably, all Dott workers are shareholders of the company. No question for users to leave the city with Dott bikes which are intended to be used only for urban journeys. As with scooters, bicycles will slow down until they come to a stop once out of the activity zone.

The arrival of bicycles in Brussels will require a second implementation of Dott in the capital, “on the side of the Porte d’Anderlecht”, as per the reports. Dott already has a site along the canal a stone’s throw from Tour & Taxis.

Dott does not outsource its operations. The company has around thirty permanent contracts in Belgium, a good half of which are mechanics. The arrival of bicycles should double the number of permanent contracts within 6 months, explains Marien Jomier. Remarkably, all Dott workers are shareholders of the company.

The scooters are often singled out for the inconvenience if badly parked, a problem that Dott does not sidestep. They have thus tried to educate their users and ensure that they do not hesitate to pay people to move badly parked scooters.