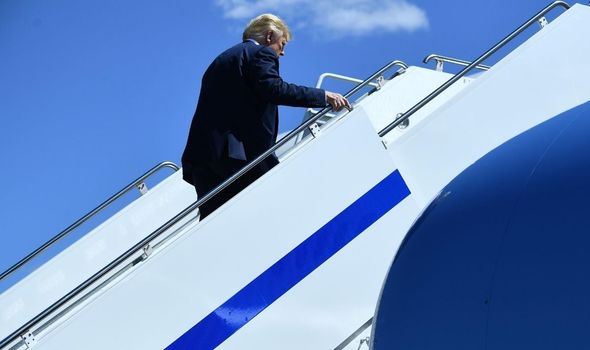 DONALD TRUMP’s plane was nearly hit by what appeared to be a drone when flying into Washington on Sunday night.

Mr Trump was travelling on the modified Boeing 757 which is part of the Air Force One fleet. Several people abroad the Air Force One plane claimed they saw a small yellow and black crossed-shaped device hovering at the side of the aircraft.

AFP White House correspondent Sebastian Smith, who was on board the plane, tweeted: “@realDonaldTrump just landed at Andrews on AF1.

“Shortly before, while descending, we flew right over a small object, remarkably close to the president’s plane.

“Resembled a drone though I’m no expert.”

The US Secret Service have not confirmed the reports.

But US government research has suggested that the damage from a civilian drone, although small in size, could be disastrous.

It said an object weighing just a few kilograms could shatter a cockpit windscreen or damage an engine.

The Federal Aviation Administration (FAA) receive thousands of reports per year about drones flying too close to other aircrafts or gliding into restricted areas.

US federal regulations demand that drones must be flown within sight of the operator.

They must also be no higher than 122 metres above the ground unless the operator has a special waiver.

According to the National Transportation Safety Board (NTSB), there have been cases in which drones have struck aircrafts.

But no incidents have resulted in injuries or a serious crash.

In 2017, a civilian drone which was flying illegally near New York hit an army helicopter, the NTSB reported.

The strike damaged the helicopter but it managed to land safely.

Drones have also disrupted operations at major airports in the US.

Pilots who were flying into Newark Liberty International Airport said they nearly collided with a small drone in 2019.

The FAA is hoping to release regulations ordering civilian drones to transmit their location and identity by the end of this year.

The regulations are designed to help stop the devices from being used by terrorists and to reduce any risks they may pose to aircrafts.

The news of the president’s possible near crash comes as he sets off on a busy campaign travel week.

On Monday, Mr Trump said the campaign had entered the “final crunch”.

He also told the Fox and Friends programme on Monday that he was compelled to campaign this week by the media’s coverage of his current campaign and presidency.

He said: “I have no choice because we have a fake media in this country.

Donald Trump landed in Minnesota on Monday and travelled to the state of Wisconsin to give a speech at a private air hangar.

On Tuesday, Mr Trump is set to visit Yuma in Arizona, a state which has not voted for a Republican presidential candidate since 1996.

The president has packed this week with campaigning as the Democrats kick off their party’s convention.

During the convention, the nomination of Joe Biden as the Democratic presidential candidate will take place.