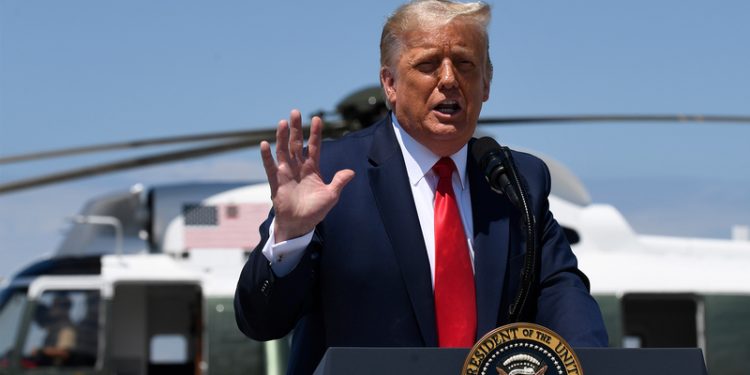 Donald Trump has claimed Joe Biden is “against God” in an attack on the presumptive Democratic presidential candidate’s faith.

In provocative remarks during a trip to Ohio, a key election battleground, the US president said Biden was “following the radical left agenda”.

Trump added: “Take away your guns, destroy your second amendment. No religion, no anything, hurt the Bible, hurt God.

Biden, who is leading in the polls, has frequently spoken about how his Catholic faith helped him cope with the deaths of his first wife and daughter in a 1972 car accident.

In a statement, he said Trump’s comments were “shameful”.

He added: “Like so many people, my faith has been the bedrock foundation of my life: it’s provided me comfort in moments of loss and tragedy, it’s kept me grounded and humbled in times of triumph and joy.

“And in this moment of darkness for our country – of pain, of division, and of sickness for so many Americans – my faith has been a guiding light for me and a constant reminder of the fundamental dignity and humanity that God has bestowed upon all of us.

“For President Trump to attack my faith is shameful. It’s beneath the office he holds and it’s beneath the dignity the American people so rightly expect and deserve from their leaders.”

Biden’s stance on abortion has antagonised many of his fellow Catholics. In 1973, he said the Roe v Wade supreme court decision went “too far”, but now believes Roe v Wade is “the law of the land, a woman has a right to choose”.

Biden is dealing with a controversy of his own, after suggesting the African American community was homogenous – a comment Trump described as “very insulting”.