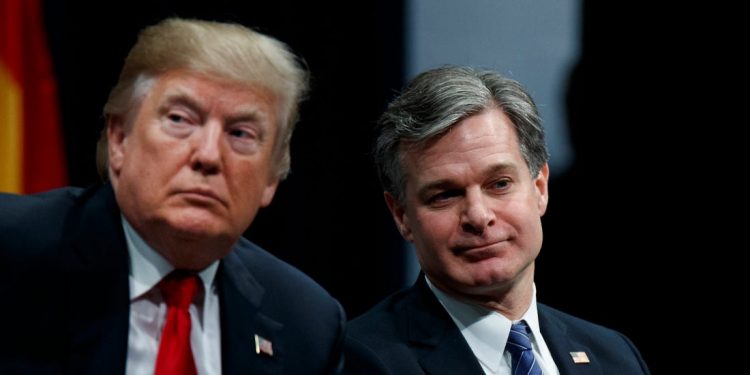 DONALD Trump has lashed out at his own FBI director Christopher Wray.

The president accused the security official of being too protective of documents relating to an investigation into Russian interference in Mr Trump’s election. It comes after a declassified document was released on Sunday which claims the FBI had lied to the Senate Intelligence Committee in 2018 about the reliability of the ‘Steele dossier’.

The Steele dossier contained information from a Russian “sub-source” about the investigation.

Senate Judiciary Committee Chairman Lindsey Graham released the declassified document alleging misdirection by the FBI, and said it showed the FBI had lied about the reliability of both the dossier and the sub-source within it.

In a Fox News interview yesterday, the president was asked by reporter Maria Bartiromo whether Mr Wray should “step down”.

Mr Trump replied: “So Christopher Wray was put there. We have an election coming up. I wish he was more forthcoming; he certainly hasn’t been.

“There are documents that they want to get, and we have said we want to get. We’re going to find out if he’s going to give those documents. But certainly, he’s been very, very protective.”

Mr Trump suggested he would wait and see regarding the actions of the FBI director.

He added: “Let’s see how Wray turns out. He’s either going to turn out one way or the other.”

It is not the first time the president has slammed the FBI director for the Russia report proceedings.

In 2019, Mr Wray backed a decision by the Justice Department inspector general Michael Horowitz that the investigation into Russian collusion was legal and proper.

He said it was “important that the inspector general found that, in this particular instance, the investigation was opened with appropriate predication and authorization.”

He said on Twitter: “I don’t know what report current Director of the FBI Christopher Wray was reading, but it sure wasn’t the one given to me.

“With that kind of attitude, he will never be able to fix the FBI, which is badly broken despite having some of the greatest men and women working there!”

In other news, the president has refused to send extra funding to the US Postal Service amid a row over mail-in voting.

Mr Trump said the funding would be used to help the post office handle the “millions and millions” of mail-in ballots in the upcoming November presidential elections.

The president has been sharply opposed to mail-in voting, repeatedly slamming it as a fraudulent method of voting.

In this instance, he told Fox News: “They want $3.5 billion for something that will turn out to be fraudulent. That’s election money, basically.”

The funding requested for the US Postal Service was $25 billion in emergency funding and $3.5 billion for election security, the BBC reported.

A spokesman for presidential opponent Joe Biden said the president was “sabotaging a basic service that hundreds of millions of people rely on.”