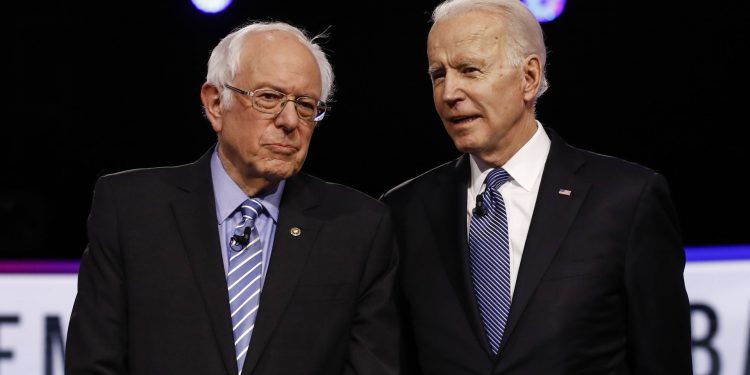 Bernie Sanders will warn that the “future of our democracy is at stake” if Donald Trump in awarded a second term at the November election, delivering a forceful appeal for voters across the ideological spectrum to unite behind Joe Biden on the opening night of the Democratic party’s national convention.

Sanders’ message of unity is reflected by the evening’s speakers, designed to demonstrate the depth of Biden’s political coalition. Sanders, who finished second to Biden in the Democratic primary race, will be joined by John Kasich, the anti-Trump Republican former governor of Ohio, and former first lady, Michelle Obama, who will end the program with a keynote speech.

According to excerpts of Sanders’ speech released ahead of the convention, the Vermont senator will urge voters to align against “greed, oligarchy and authoritarianism”.

“My friends, I say to you, and to everyone who supported other candidates in this primary and to those who may have voted for Donald Trump in the last election,” he will say.

In the first moments of the broadcast, actor Eva Longoria, host for the evening, acknowledged that this year’s convention would be unlike any other. Traditionally, she said, a convention is a quadrennial exercise in reaffirming “our democracy.”

“This year, we’ve come to save it,” Longoria said.

With the virtual rap of a gavel, Mississippi congressman Bennie Thompson, the convention’s chairman, formally opened the four-day presidential nominating convention, an affair that has been entirely reshaped by the coronavirus pandemic.

It was originally planned for Milwaukee, Wisconsin, in mid-July, with tens of thousands of in-person attendees. Now, renamed the “Convention Across America,” it has been condensed into two-hour primetime events featuring some of the nation’s most prominent politicians alongside everyday Americans.

Amid the appeals to unity, were searing reminders of the lives touched – and lost – by the parallel crises of a global pandemic and racial injustice.

From a nurse in Texas worried about “the kiddos” going back to school in a pandemic to a Pennsylvania farmer fearful that he might be the last generation to till a field if the economy doesn’t improve and a repentant Trump supporter, all urged the nation to choose new leadership.

In one of the most moving segments of the evening, Kristin Urquiza said her father was a healthy 65-year-old when he died from coronavirus after Arizona rushed to reopen its economy at the urging of the president.

“My dad was a healthy 65-year-old,” Urquiza said. “His only pre-existing condition was trusting Donald Trump, and for that, he paid with his life.”

Urquiza said she would cast her vote for Bidenin November to honor her father. “One of the last things that my father said to me was that he felt betrayed by the likes of Donald Trump,” Urquiza said. “And so, when I cast my vote for Joe Biden, I will do it for my dad.”

In a summer of racial reckoning sparked by the police killing of George Floyd, Biden joined the event on Monday night to host a conversation on racial injustice and police reform with Chicago mayor Lori Lightfoot of Chicago; Houston police chief Art Acevedo, and Gwen Carr, the mother of Eric Garner, who died in a police chokehold in 2014.

Floyd’s family addressed the convention, and asked Americans to join his family in a moment of silence.

“George should be alive today,” Floyd’s brother, Philonise Floyd, said before beginning a somber roll call of African Americans who have died at the hands of police.

Democrats hope the event’s unprecedented nature will serve as a stark reminder to those watching at home of the president’s failure to contain the contagion in the US. More than 170,000 people have died and more than 5.4m coronavirus cases have been reported, far more than any other country in the world.

“If it weren’t for Trump’s abject failure as a president in the face of this virus, it wouldn’t have to be virtual,” Wisconsin Democratic party chair, Ben Wikler, wrote on Twitter. “But the @DemConvention team has made the right, tough decisions.”

New York Governor Andrew Cuomo, who was widely praised for his handling of the coronavirus that ravaged his state earlier this year, laced into Trump’s response to the pandemic.

“Only a strong body can fight off the virus, and America’s divisions weakened it,” Cuomo said, seated at his desk as America came to know him during daily press briefings, with a powerpoint presentation stating the number of days the US has been enduring the pandemic: “Today is Monday. Day 170.”

“Donald Trump didn’t create the initial division,” he continued. “The division created Trump; he only made it worse.”

New polling shows that the American public is increasingly disappointed by Trump’s handling of the virus, and his presidency, while Biden maintains a steady lead, according to national surveys.

Michelle Obama, one of the most popular figures in American politics, and, according to Gallup, the world’s most admired woman of 2019, will draw from her long friendship with Biden to make the case for his candidacy.

“He was a terrific vice-president,” she said in a video excerpt. “He knows what it takes to rescue an economy, beat back a pandemic and lead our country.”

At a virtual fundraiser on Monday afternoon, Biden, who will formally accept the Democratic presidential nomination on Thursday, summarized his message for the nation: “I’m going to represent everyone, even those who didn’t vote for me.”

Trump delivered a starkly different message in Oshkosh, Wisconsin, on Monday, hours before the convention formally began in Milwaukee.

There he addressed supporters from an airport landing strip, mocking Michelle Obama for pre-taping her remarks while delighting the crowd with a promise to deliver a “live speech” from the White House when he accepts the Republican nomination next week.

He then claimed that the only way he would lose in November was “if the election is rigged”.