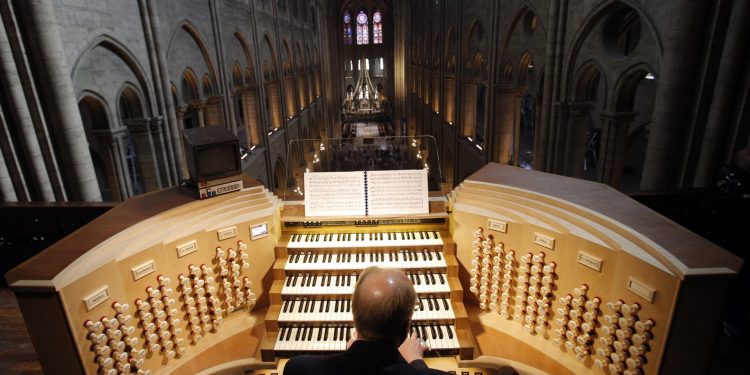 Work has begun to dismantle and repair the grand organ in Notre Dame Cathedral in Paris, which escaped serious damage after a devastating fire in April 2019.

The instrument, believed to be the biggest in France, was untouched by the flames that threatened to engulf the building and the gallons of water used by firefighters to extinguished the blaze.

Though largely spared, experts say it suffered heat damage and is coated in dust from the 460 tonnes of lead tiles from the cathedral roof and spire that went up in smoke. With the roof destroyed and the inside of the cathedral exposed, the grand organ also suffered from the heatwave last summer.

On Monday, workers were to start taking apart the instrument, which has 8,000 pipes, five keyboards and 109 stops and is situated under the rose-stained window to the west of the cathedral. The pipes will be individually cleaned and repaired

The aim is to have the organ, situated 16 metres above floor-level, playing again on 16 April 2024, exactly five years since the fire, a wish expressed by President Emmanuel Macron on the night of the conflagration.

Vincent Dubois, one of the cathedral’s three organists, said the instrument was “extraordinary”.

“The higher you go, the fuller and rounder the sound is. It’s a sound that is extremely warm over the 120 timbres of the instrument. If you add to this the acoustics of the place, it gives a sound that is absolutely unusual, that exists nowhere else. This is what makes the instrument so famous,” he told RFI.

Once the organ is repaired, it will take six months to tune and harmonise.

Last month, the Élysée Palace announced that the 12th-century cathedral would be rebuilt as it was before the fire. After the blaze Macron had suggested the monument could be renovated with a “contemporary architectural gesture” that led to all manner of wild suggestions, including a glass spire and a rooftop pool.

However, after a meeting with the country’s National Heritage and Architectural Commission, the president said he had accepted the cathedral should be returned to its pre-fire design. This includes the spire, a 19th-century addition in Gothic style by the celebrated architect Eugène Viollet-le-Duc, whose plans have been kept.

“The president has confidence in the experts and has approved the outlines of the project presented by the chief architect, that includes rebuilding the spire exactly as it was,” the Elysée said in July.

The president’s office said holding an architectural competition to design a new spire would delay the renovations beyond the five-year period set by Macron.

“After consultations with major architects we concluded that the gamble on a contemporary spire is complicated and that maybe we can find another contemporary touch,” it added.

Work to remove the fused tangle of scaffolding around the spire – that was undergoing renovations at the time of the fire – that collapsed on to the cathedral’s stone structure should be finished “by the end of September at the latest”, Gen Jean-Louis Georgelin, who is overseeing the repairs, said.