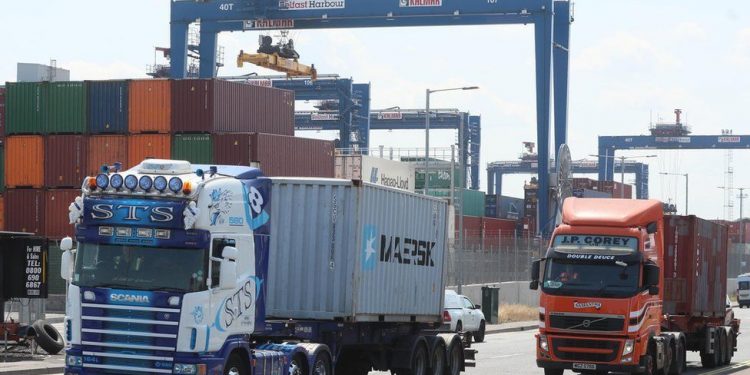 London (Brussels Morning) Remember Boris Johnson’s incessantly-repeated quote throughout the autumn of 2019 about having an “oven-ready” Brexit deal and how he would slam it in the microwave as soon as that December’s general election was over? It does make you wonder whether he read the instructions on the packet before banging it in. Did he perhaps put a convection oven-only dish that he put in the microwave, despite the label saying it was ‘not suitable’? Was it still frozen in the middle when he took it out?

Bizarrely, he even blamed the hapless then-Leader of the UK Opposition Labour Party, Jeremy Corbyn, for stopping the deal before the election. Corbyn, who never got to grips with the details of Brexit anyway, was fronting a party that certainly stood to lose some voters if it actively opposed Brexit – but would have lost many more had it supported it.

Anyway, Corbyn is now ancient history, give or take his whiny diehards on Twitter, still insisting that the cataclysmic UK election result 18 months ago wasn’t their fault. Corbyn’s problems are over. But Johnson’s are apparently multiplying.

The Northern Ireland Protocol, a bedrock component of the Brexit agreement with Europe, effectively kept Northern Ireland within the EU customs area. This was to prevent a hard border on the island of Ireland, which would be a breach of the 1998 Belfast Good Friday Agreement and potentially threaten the still-fragile peace of the last quarter century.

This solution required the introduction of border checks in the Irish Sea, because British mainland meat products and other goods became subject to EU veterinary regulations and therefore had to be treated as if originating from a third country.

So far, so good. But what the British had not counted upon, apparently, was the EU insisting on actually following the terms of the agreement that the UK had willingly signed with them! This, according to the UK’s Chief Brexit negotiator David Frost, no relation to the late satirist despite this peculiar turn of events, was ‘purism’ by the EU. I hope the next time Lord Frost awaits the delivery of the groceries he’s ordered online, that he won’t be so quaint as to expect them to turn up. How inflexible. How purist!

Furthermore, Frost said, it was the EU, not the innocent British Brexiteers, always acting in such impeccably good faith, who were risking the peace in Northern Ireland  despite the Brexit squad turning a deaf ear to precisely such fears during the years of chaos that followed the UK’s 2016 EU referendum.

Indeed, the government has issued a document stating that “the circumstances in which the current Protocol was agreed reflected the extraordinarily difficult context of the preceding three years of negotiations.” In other words, they are retconning the deal they were recently so very proud of as the fault of their predecessors; it was somehow foisted upon them and the problems they were consistently warned about were apparently “unforeseeable”. There are more sliding timelines at work here than a Marvel-DC crossover.

Now, the British government is saying, renegotiation of a deal agreed only a year and a half ago, that they now imply they were somehow tricked into, is essential. What is actually essential from all this, is that they are confirming to their EU partners their essential untrustworthiness and/or incompetence.

It’s another example of the UK overestimating its importance in the world, as if the last century during which it was constantly cut down to size, hadn’t happened. Potential unilateral suspension of the protocol by the UK would inevitably be followed by the EU enacting trade sanctions. This would hugely affect the relationship – and the prospects of a trade deal – with the United States, whose relatively new administration has repeatedly warned the UK over this very issue. It may also incur the non-cooperative wrath of the spurned supporters of the 2017-19 Conservative minority government, the Democratic Unionist Party, should a new, “unacceptable” Brexit arrangement emerge. Doubtless, this will all be rebranded “unforeseeable” at some – as yet unforeseen – point.

This duplicity masquerading as ineptitude – or vice versa – appears to be finding its way into other areas of the labyrinthine Brexit operation. The UK has had to re-open its sensitive trade agreement with Ukraine, which was being watched closely by both the EU and Russia. Some of the issues necessitating the re-opening of the treaty are related to the fact that sections of it appeared to have been copied and pasted from older, pre-Brexit, trade agreement templates, ones which bound the UK to EU rules.

It has often been persuasively argued that a future UK administration will have to quietly adjust the UK’s relationships with Europe to one more akin to Norway and Switzerland, once all the chest beating has stopped and all the “unforeseeable” circumstances have been revealed. As and when this happens, perhaps the Ukraine cock-up will be re-interpreted as being ahead of the curve.

The sheer size and gravitational pull of the European Union, remaking global markets simply because of its existence, makes the striking out of EU-related details from the Ukraine deal a medium-term measure at best. They’ll be back – in print or in practice – eventually. None of Great Britain’s ongoing post-Imperial mewling and puking can change that.