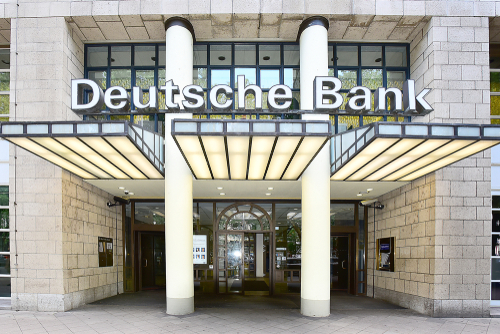 Brussels (Brussels Morning) Even though Deutsche Bank posted a profit last year, the first since 2014, and looks forward to an address by Germany’s Chancellor Angela Merkel at its annual New York reception, the bank’s future remains clouded, Reuters reports.

The German lender has been contending with a difficult period over the past several years, combating a series of losses and scandals. The bank brought in new CEO Christian Sewing in 2018 to launch a major overhaul of its operations in an effort to return to profitability.

Even though the bank managed to turn a profit last year, analysts predict it is on course to make 1.6 billion euro less in revenues in 2022 than in 2020, a 6% drop. All of the bank’s divisions are expected to keep their current revenues or generate even less than now.

Since taking the helm, Sewing was forced to focus on costs, as low interest rates and fierce competition have been eating into the profits of all European banks. Sewing has so far closed several businesses, and plans to cut 18.000 jobs.

Despite the preference of German politicians to avoid the country’s banking sector and to show instead their public support for car manufacturers and other German industries, Merkel has accepted the invitation to join the virtual reception honouring the bank’s 150th anniversary.

It is a rare show of support by the German Chancellor for the bank which has been piling up fines from US regulators for its part in money laundering and graft scandals, and whose questionable ties to former US President Donald Trump have also helped to tarnish its public image.

Sewing has since cut ties to Trump and bolstered the bank’s compliance operations, as the new management condemns the lender’s “past transgressions”. Analysts remain sceptical, however, whether the about turn will be enough to keep the bank profitable in the long run.