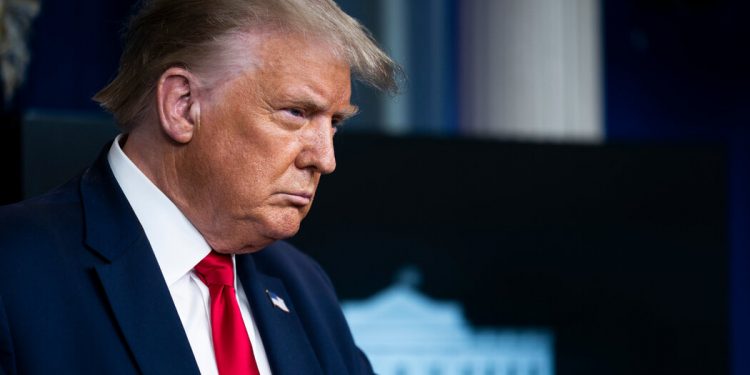 New York prosecutors investigating Donald Trump’s finances previously issued a subpoena to Deutsche Bank, one of the foremost lenders to the president’s business, as part of their inquiry – and the bank complied, according to the New York Times.

The office of the Manhattan district attorney, Cyrus Vance, is seeking eight years of the president’s personal and corporate tax records, but has disclosed little about what prompted the prosecutor and his team to request the records beyond payoffs to women to silence them about alleged affairs with Trump in the past.

Lawyers for Vance told a judge in New York on Monday that he was justified in demanding the records from Trump, citing public reports of “extensive and protracted criminal conduct at the Trump Organization”.

A report emerged Wednesday that Vance’s office subpoenaed the German lender last year in what the New York Times said was a sign that their criminal investigation into Trump’s business practices is more wide-ranging than previously known.

The report noted that this appeared to be the first instance of a criminal inquiry involving Trump and his dealings with Deutsche Bank.

The German bank, which has been a longstanding source of financing to Trump’s real estate empire, obeyed the subpoena and handed over records supplied by Trump to the bank during the course of applying for loans, the report said, citing unnamed sources with knowledge of the investigation.

Trump’s lawyers last month said the grand jury subpoena for the president’s tax returns was issued in bad faith and amounted to harassment.

In a court filing on Monday, though, attorneys for Vance said Trump’s arguments that the subpoena was too broad stemmed from “the false premise” that the investigation was limited to so-called “hush-money” payments.

They said public reporting demonstrates that at the time the subpoena was issued “there were public allegations of possible criminal activity at plaintiff’s New York county-based Trump Organization dating back over a decade”.

They added: “These reports describe transactions involving individual and corporate actors based in New York county, but whose conduct at times extended beyond New York’s borders. This possible criminal activity occurred within the applicable statutes of limitations, particularly if the transactions involved a continuing pattern of conduct.”

Vance sought the tax records in part for an investigation of how Michael Cohen, Trump’s former fixer and now convicted felon, arranged to keep the adult film producer and actor Stormy Daniels and the model Karen McDougal from airing claims of extramarital affairs with Trump during the 2016 presidential race. Trump has denied the affairs.

On Wednesday, the New York Times further reported that the subpoena to Deutsche Bank sought any materials that might point to possible fraud and that Deutsche’s cooperation contrasted with numerous other attempts to access Trump’s financial records over the years that have been blocked by successful legal challenges.

Other investigators have requested records from Deutsche Bank, which was one of the few banks willing to lend to Trump after a series of corporate bankruptcies starting in the early 1990s.

Two congressional committees, both controlled by Democrats, subpoenaed the bank for documents related to Trump, who sued to block their release.

Trump has said the investigations are all politically motivated. Earlier this week, he called Vance’s investigation “a continuation of the witch hunt”.