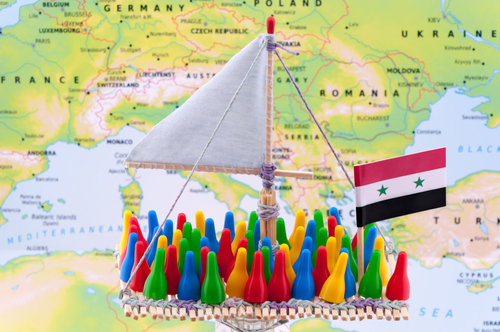 Wooden raft with sail and flag of Syria embarked with big crowd of colorful game pieces that supposed to be looking similar to refugees escaping from Syria. Map of Mediterranean sea in the background.

Brussels (Brussels Morning) Denmark’s authorities have sent letters to hundreds of Syrian refugees from the Damascus region, informing them that their Danish residence permits have either been revoked or simply not renewed, and that they will have to return to the war-torn country, Deutsche Welle reports.

Denmark reclassified the Syrian capital as a safe zone last summer, the only country in Europe to do so. It is the only country in the EU to use this classification as the reason to revoke residency permits for refugees who previously were granted asylum in the country.

“Although the war is neither over nor forgotten, the Danish authorities think that conditions in Damascus are so good that Syrian refugees can now be sent back there”, Charlotte Slente, head of the Danish Refugee Council (DRC) said.

Slente deems the decision irresponsible and claims that refugees face the “risk of serious attacks and persecution”, should they return to their country of origin. “The fact that there is no fighting in Damascus does not make the city a safe place for returning refugees”, she said.

Denmark, which is not cooperating with the Syrian regime ruled by President Bashar al-Assad, currently has no means to enforce deportation, which means that refugees who refuse to leave the country voluntarily are being transferred to deportation camps, where they could wait for years for conditions in the country to improve.

The government’s move to quickly deport refugees is part of a 2019 immigration bill, which was proposed by the previous, conservative government, and is being followed on by the current Social Democrat government, which is propped up in parliament by right-wing populists.

Current Prime Minister Mette Frederiksen, though left-leaning on most social policies, leans much farther to the right on migration and asylum policy, and has a long-term goal of stopping asylum seekers from coming into the country in the first place. Denmark also offers financial support for refugees who leave voluntarily, and the government is trying to dissuade refugees from seeking asylum in the country.