Demonstrators clash with London police during ‘Kill the Bill’ protests 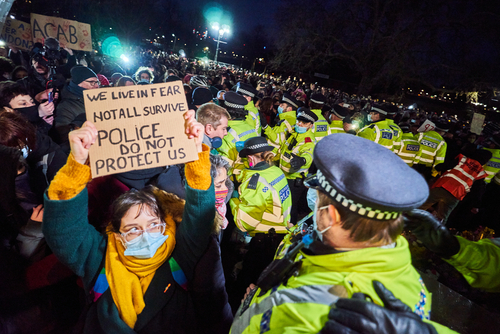 London (Brussels Morning) Thousands of protestors took to the streets across Britain on Saturday to demonstrate a proposed law, which would give police more powers to suppress protests. In London, the protest turned violent when elements in the crowd clashed with police, Reuters reported.

The Metropolitan police reported 26 arrests and 10 officers injured following clashes with groups of protesters in Central London. Police Commander Ade Adelekan told Sky News that the vast majority of people adhered to social distancing and left when asked to do so by the officers.

“However, a small minority did not engage despite the repeated efforts of officers on the ground”, Adelekan said. “This left us with no option but to move to an enforcement stage and arrests have been made”.

Organisers called on demonstrators to remain socially distanced as the crowd grew to more than 300 and speeches were made opposite the Houses of Parliament. Former Labour Party leader Jeremy Corbyn was among those addressing the protest.

Corbyn said he was there “to defend the rights of free speech, and the rights of organisations in our society”. The former opposition leader, a veteran activist himself, warned that the proposed bill is a “very dangerous, slippery slope”, and defended the right to protest by noting “if we don’t protest, things don’t change.”

The proposed Police, Crime, Sentencing and Courts bill would significantly increase police powers aimed at preventing and stopping protests. The police would be able to impose start and finish time for protests, set noise limits, and fine protesters based on breaching restrictions they “ought” to have known about, without having to be given specific instructions by police officers.

The bill would also make it an offence to “intentionally or recklessly” cause “public nuisance”, allegedly a ploy to stop people hanging off bridges, gluing themselves to windows or employing other radical visibility tactics. Critics warn that the latter provision is too vague, and that it would allow the police to arrest people for a wide range of currently legal actions.