Demonstration of November 21: 17 suspects have been identified 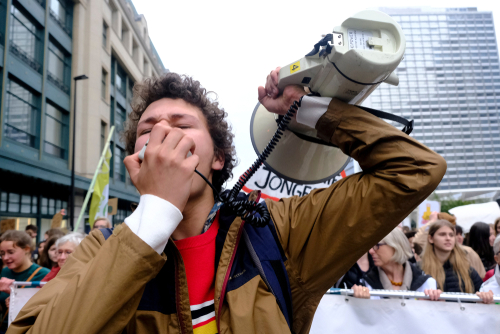 Brussels (Brussels Morning) These are people who disrupted the demonstration, caused damage and threw various projectiles at the police.

Following the demonstration on Sunday, November 21 in Brussels against the Covid Safe Ticket, 17 of the 19 suspects have already been identified by the task force of the Brussels-Capital Ixelles police zone.

These are people who disrupted the demonstration, caused damage and threw various projectiles at the police. Among them, a suspect was identified on the basis of camera images showing him throwing cobblestones, among other things, at the police.

The search and arrest went off without incident. The suspect confessed to the charges. It was made available to the examining magistrate after the hearing. The latter charged him with the count of willful assault and battery with premeditation against police officers in the exercise of their functions, and armed rebellion in group and with concentration.

He was released on conditions.

According to reports, more than 35,000 people participated in the demonstrations against new sanitary measures that were implemented in Brussels. This included the controversial Covid ticket policy, which allowed only vaccinated people access to public places.

The protest turned violent and a lot of demonstrators ended up causing severe damage to the public as well as private properties. Initially, there were 42 administrative arrests and 3 judicial arrests that were made right on the next day of protest.

Initially, police were able to identify 7 suspects and who were directly involved in the demonstration. Eventually, the identities of 19 suspects were released, and their images were circulated online.

All suspects were young males, whose description was shared with the public and people were urged to identify these suspects based on the images provided. Thanks to the testimonials and updates sent by the people, and an active effort from the police, 17 out of 19 of these suspects have been caught so far.