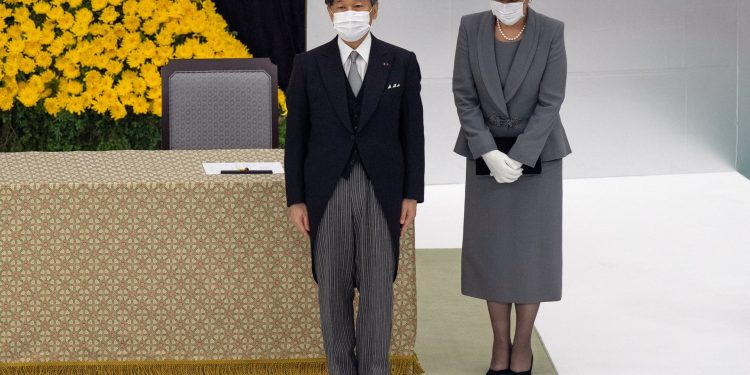 Japan has marked the 75th anniversary of its surrender in the second world war with Emperor Naruhito expressing “deep remorse” over his country’s wartime actions at a sombre annual ceremony curtailed by the coronavirus pandemic.

Naruhito pledged to reflect on the war’s events and expressed hope that the tragedy would never be repeated. There was no word of apology from the prime minister, Shinzo Abe, who gave thanks for the sacrifices of the Japanese war dead.

“Reflecting on our past and bearing in mind the feelings of deep remorse, I earnestly hope that the ravages of war will never be repeated,” Naruhito said in a short speech at the event in Tokyo marking the 75th anniversary of Japan’s surrender on 15 August 1945.

Amid virus fears and worries about the fading memories of the fast-ageing war generation, about 500 participants, reduced from 6,200 last year, mourned the dead with a minute of silence. Masks were required and there was no singing of the Kimigayo national anthem.

Naruhito has promised to follow in the footsteps of his father, who devoted his 30-year career to making amends for a war fought in the name of Hirohito, the current emperor’s grandfather.

Abe has increasingly sought to whitewash Japan’s brutal past since taking office in December 2012. He has not acknowledged Japan’s wartime hostilities during 15 August speeches, which had previously been a nearly 20-year tradition that began with the 1995 apology of the Socialist party prime minister Tomiichi Murayama.

Abe said the peace that Japan enjoys today was built on the sacrifices of those who died in the war. He pledged that Japan would reflect on lessons from history and will not repeat the war devastation. He listed damage inflicted on Japan and its people, including the US atomic bombings of Hiroshima and Nagasaki, firebombings of Tokyo and the fierce battle of Okinawa.

He pledged to play a greater role in tackling global problems. Under his goal of turning Japan into a “beautiful” and “normal” nation, Abe has steadily pushed to cleanse Japan of its embarrassing wartime history and build up its military by stretching the interpretation of Japan’s war-renouncing constitution. It includes acquiring greater missile defence capability in the face of a growing military threat from North Korea and China.

Abe stayed away from a Tokyo shrine that honours convicted war criminals among the war dead. He sent a ritual cash, seeking to avoid angering China and South Korea, which consider the Yasukuni shrine a symbol of Japan’s militarism. It honours 2.5 million war dead, mostly Japanese, but among them are senior military and political figures convicted of war crimes.

The South Korean president, Moon Jae-in, offered talks with Japan to resolve their feud over wartime grievances as his country celebrated the 75th anniversary of its liberation from Japanese colonial rule. In a nationally televised speech, Moon said his government had left the door of consultations wide open for Japan to settle a long legal and diplomatic dispute over compensation for Koreans who had been subjected to forced labour.

Relations between South Korea and Japan sank to their lowest point in decades in 2019 as they allowed their disagreements over wartime history to spill over into issues related to trade and military cooperation.

Moon avoided direct criticism of the conservative government of Abe, which has insisted that all compensation issues were settled when the two countries normalised relations under a 1965 treaty. That stance was rebutted by South Korea’s supreme court in 2018 when it ruled the deal did not cover individual rights to seek reparations and called on Japanese companies to compensate ageing Korean plaintiffs.

“Our government is ready to sit face-to-face with the Japanese government at any time to find a mutual solution the victims can support,” Moon said.

Moon also called for North Korea to respond to South Korean proposals for bilateral cooperation, including joint programmes against Covid-19 and other diseases, and the resumption of temporary reunions between ageing relatives separated by the 1950-53 Korean war.