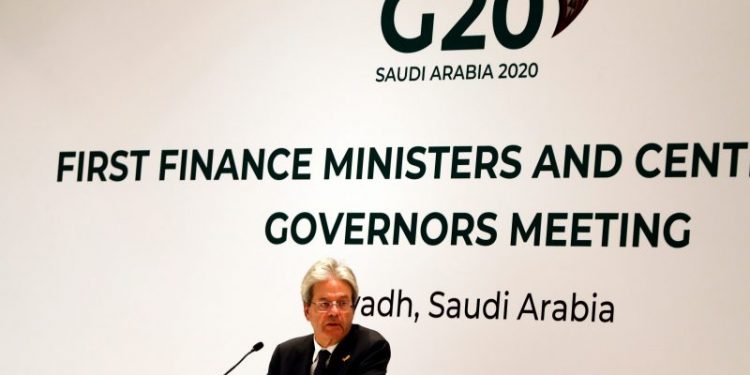 Brussels — (Brussels Morning) Today, Economy and Finance Commissioner Paolo Gentiloni is attending the G20 finance ministers and central bank governors virtual meeting. Recently, the European Parliament appealed to EU officials to downgrade the level of their representation at the upcoming G20 summit in November, because of their human rights concerns in relation to the current G20 Saudi presidency.

The officials are expected to discuss updates to the G20 Action Plan agreed in April,which has been supporting the global economy throughout the COVID-19 pandemic, and how to spur global recovery from the health crisis. Also on the table is an assessment of possible downside risks and policy responses to protect the economy, including a possible proposal to extend debt relief for crisis-hit poor countries (the so-called Debt Service Suspension Initiative).

Yesterday, the NGO Transparency International penned an open letter to the G20 finance ministers urging them to “invest in people” and additionally to “ensure that funds being made available reach those that need them the most”. While considering the pledge to relieve debt for ailing countries, the international watchdog insisted “we call on G20 to cancel existing debt until at least the end of 2021 for all countries that need such relief to respond to or recover from the COVID-19 pandemic, particularly the 77 poorest countries.”

The virtual talks, hosted by current G20 president Saudi Arabia, come a day after the International Monetary Fund (IMF) warned that the world economy will contract 4.4% in 2020 and that damage wreaked by the pandemic would be felt for years. According to the IMF estimates, the eurozone economy will be hit by 8.3%, a slightly better projection than the 4.9% prediction in June. Germany’s economy will contract 6%, Spain’s 12.8 %and Italy’s 10.6%. China’s economy will grow by 1.9 percent. However, for 2021, the IMF expects that the eurozone will see a growth of 5.4%.

Rules on the making for digital currencies

Yesterday, a report from the G20, announced it is working with IMF, the World Bank and the Bank for International Settlements (BIS) to formalize the use of central bank digital currencies (CBDC) in banking systems.

According to the report, by the end of 2022, it is expected that the G20 members, the IMF, the World Bank and the BIS will have completed regulatory stablecoin  — digital currencies —frameworks and research as well as the selection of CBDC designs, technologies and experiments.

Whereas bitcoin transactions run on a blockchain network that protects personal data from central actors, central banks would maintain access and visibility into CBDC payments and identities.

Disagreements over a global tax system

The G20 Finance Ministers and Central Bank Governors will also discuss the progress made by the G20/ Organisation for Economic Cooperation and Development (OECD) Inclusive Framework on Base Erosion and Profit Shifting (BEPS) by addressing the tax challenges arising from the digitalisation of the economy and the way forward.

Back in June, the Tax Justice Network reported that US Treasury Secretary Steve Mnuchin had written to four European finance ministers  — France, Italy, Spain and the UK — saying that the US was “unable to agree even on an interim basis changes to global taxation law that would affect leading US digital companies.” According to the NGO, “the [US] intention was to block any further progress at the OECD”.