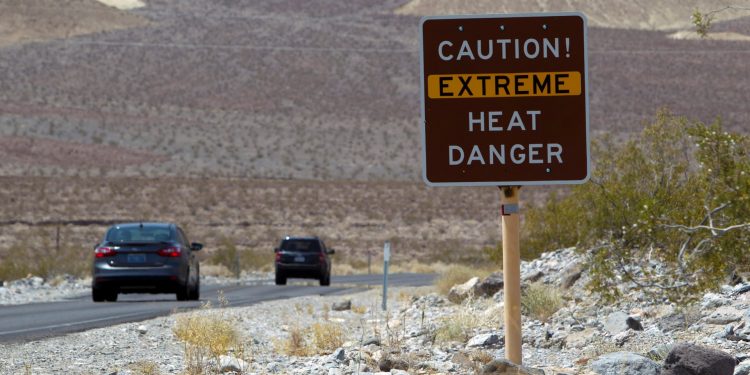 A temperature of 54.4C – or 129.9F – has been recorded in Death Valley, California, in what some extreme weather watchers believe could be the hottest reading ever reliably recorded on the planet.

The United States National Weather Service’s automated weather station at Furnace Creek near the border with Nevada hit the extreme high at 3:41pm on Sunday afternoon, a statement said.

“This observed high temperature is considered preliminary and not yet official,” a statement from NWS Las Vegas said.

“If verified, this will be the hottest temperature officially verified since July of 1913, also at Death Valley.”

If the temperature reading is verified, it would beat the previous hottest August day for the United States.

Death Valley’s all-time record high, according to the World Meteorological Organization, is 134F (56.7°C) taken on 10 July 1913 at Greenland Ranch. That reading still stands as the hottest ever recorded on the planet’s surface, according to the WMO.

The Death Valley 1913 reading was installed as the planet’s hottest after a 2013 WMO investigation dismissed a 58C temperature supposedly recorded in Libya in September 1922.

A committee concluded the Libya reading was likely wrong, with human error, the type of thermometer used and inconsistencies with other temperatures in the region all contributing to that temperature being struck off.

But Christopher Burt, from a private US meteorological service, who prompted the investigation into the Libya record, has also challenged the legitimacy of the 1913 Death Valley readings, saying they were “essentially not possible from a meteorological perspective”.

Speaking to the Washington Post, Prof Randy Cerveny, of Arizona State University, who leads a WMO group that maintains an archive of climate extremes, said of the new Death Valley temperature reading: “Everything I’ve seen so far indicates that is a legitimate observation.”

He was recommending the WMO “preliminarily accept the observation” but that the reading would be examined in detail in the coming weeks.

The only other WMO-verified temperature record higher than those taken at Death Valley are from July 1931 at Kebili in Tunisia, where a reading of 131F (55C) was taken.

But like many older temperature readings, this too has been challenged.

Some extreme weather watchers believe the most recent Death valley reading could – in time – be verified as the hottest ever reliably recorded on the planet.

Bob Henson, a meteorologist, told a blog of the American Geophysical Union: “It’s quite possible the Death Valley high set a new global heat record. The extreme nature of the surrounding weather pattern makes such a reading plausible, so the case deserves a solid review.

“There are nagging questions about the validity of even hotter reports from Death Valley in 1913 and Tunisia in 1931. What we can say with high confidence is that, if confirmed, this is the highest temperature observed on Earth in almost a century.”

He said the Death Valley reading would need to be checked and verified before any record could be confidently declared. Checks would be made of the instruments to make sure there had been no changes at the Death Valley site, which is close to a visitors’ centre at Furnace Creek.

He said: “There will be a lot of cross-checking to make sure that that value is correct.”

Elsewhere in California, record high temperatures led to wildfires, at least one of which was reported to have turned into a “firenado”. This rarely recorded phenomenon occurs when hot air from a fire on the ground rises in a tall column and starts to rotate in the winds higher off the ground, giving the appearance of a tornado mixed with fire.

The heatwave in the west of the US has also given rise to lightning storms which may start further wildfires, leading agencies in the region to put out warnings.

Persistently high temperatures have been recorded in many areas of the northern hemisphere this summer, giving added weight to the prediction made earlier this year that it could be the hottest on record, as the Earth’s climate changes under human influence. Most concerning for climate scientists has been a “heatwave” recorded in the Arctic.

A record temperature of 38C was observed in Siberia in June, with the Arctic sea ice shrinking to its lowest extent for 40 years in July. Siberian temperatures were more than 5C above average from January to June. New research has suggested that on current trends the Arctic could be ice-free in summer as soon as 2035.