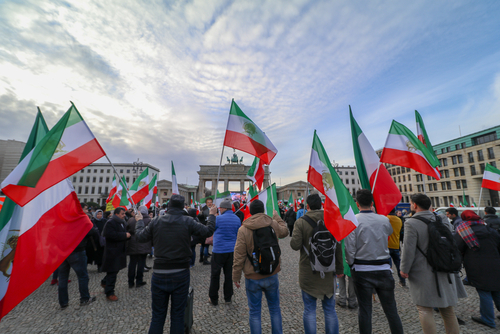 Belgium (Brussels Morning Newspaper) Dozens of people were killed in Iran during an escalating series of protests following the death of a young Kurdish woman who was apprehended by Morality Police for allegedly violating the country’s strict headscarf laws.

The protests began on 16 September, after 22-year-old Mahsa Amini died in a Tehran hospital following her arrest by the Morality Police. Witnesses claim they saw the police beating her in the van as she was taken from her family during a trip to Tehran, but the police deny any violence took place.

According to an official police report, Amini fell ill during a re-education session in the police station, in the presence of other girls similarly arrested for not adhering to Iran’s strict dress code for women. Her parents are challenging this account, claiming she was a healthy young woman and unlikely to suffer a heart attack.

She was admitted to the hospital in a coma, and her parents were informed that their daughter was brain dead. As preparations for the funeral took place, protests started erupting in Tehran, and in her hometown of Saqez, in Iranian Kurdistan. The protests soon started spreading to other cities in Iranian Kurdistan, and to other larger cities in the rest of the country.

Within a week, protests have significantly escalated, turning from protests against compulsory hijab laws into protests against the Islamic Republic itself, with hundreds of women tearing off their headscarves as a show of defiance, publicly cutting their hair, and joining – and even leading – the protests in large numbers, an extremely unusual sight in Iran.

The protesters can be seen chanting “Women, life, freedom!” in various social media videos, as well as yelling “Death to the dictator!”, referring to the country’s Supreme Leader, Ayatollah Ali Khamenei. Many are openly clashing with the police, tearing down billboards featuring Khamenei, and directly assaulting police stations and Iranian Revolutionary Guard Corps (IRGC) posts.

The police responded to the protests with live fire and violent crackdowns, with Iran Human Rights group reporting at least 31 civilians have been killed by 22 September in various protests all over Iran. More than 500 were reportedly injured and required medical care, while hundreds more were arrested by the police – some 280 on Thursday alone, according to official government figures.

Internet monitoring groups such as NetBlocks report that Iran is currently undergoing the most severe internet blackouts since 2019, with Instagram and WhatsApp almost completely blocked in the country, and internet access is cut or severely throttled in most major cities – a frequent government strategy aimed at making organisation of protests more difficult. At the same time, more and more official voices are claiming that the protests have been taken over by “foreign elements” – a common claim that precedes a more violent stage of crackdowns.

On Friday, the Iranian Army announced it would “confront the enemies” to ensure security, announcing the authorities’ intention to involve the armed forces in silencing the protests. “These desperate actions are part of the evil strategy of the enemy to weaken the Islamic regime,” the Army said in a release.

While Amini’s death served as a spark that ignited the protests, their growth and escalation seem to be fueled by decades of political and economic frustrations. Protesters were filmed chanting not only against abolition of hijab laws, but also against the brutality of security forces, impunity of authorities, clerical control over the country, all of which are compounded by an economy devastated by decades western sanctions and government misuse.

According to BBC Persian reporter Rana Rahimpour, the protests represent “the most serious challenge to the Islamic leadership of Iran” seen in many years. The authorities are likely to further escalate the crackdown on dissenters, fearing a revival of the 2019 mass protests, which started over a hike in fuel prices but also escalated to demand a regime change.

More than 1,500 people were killed during the government crackdown on 2019 protests, with the authorities forbidding the families of those killed to speak to any media, or even to hold funerals, in order to mask the real extent of life loss that took place.

The election of ultra-conservative hardline cleric Ebrahim Raisi for president last year further incited the dissatisfaction among the citizens of Iran, with many feeling the elections were rigged so that Khamenei’s favourite candidate would win. Raisi previously ran for president in 2017, but lost to moderate incumbent Hassan Rouhani by more than 20 points.

Rouhani attempted to steer the country into reconciliation with the west, with the signing of the 2015 Iranian nuclear deal, which granted the country a reprieve from decades of western economic sanctions in return for accepting hard limits on Tehran’s nuclear programme, designed to keep it firmly within civilian and research purposes.

While the deal warmed the country’s relations with the west and provided a much-needed economic boost, it was torpedoed in 2018 by US President Donald Trump, who felt that the treaty signed by his predecessor was overly favourable for Iran. For Ayatollah Khamenei and Iran’s clerical leadership, this move was a validation of their belief that the west cannot be trusted, and that the country needs to return to the conservative, hardline anti-western path.

Ahead of the 2021 elections, Khamenei and the country’s Guardian Council barred all moderate candidates from participating in the elections, including all of Rouhani’s political allies and associates. Raisi was promoted front and centre in what many analysts believe was a move by Khamenei to set up his successor.

The New York Times reported on 16 September that Khamenei was seriously ill and being monitored by the doctors, having made no public appearance for nearly two weeks. Khamenei has long been suffering from cardiac disease, and has had prostate cancer surgery some eight years ago. It is highly likely that Khamenei wanted to make sure a conservative hardliner like Raisi was set in a position to succeed him should anything happen to him. Khamenei also became Supreme Leader from the position of President of Iran, following the death of the country’s first Supreme Leader, Ayatollah Ruhollah Khomeini, in 1989.

Raisi, a former Chief Justice accused by international rights organisations of ordering executions of thousands of political prisoners, has strengthened the country’s strict clothing requirements for women this summer, increasing the penalties for women who refuse to cover their hair.

Before his decree, many Iranian women displayed disobedience by deliberately pulling their headscarves and hijabs high on their heads, revealing some of their hair, with the Morality Police mostly tolerating the widespread practice. For many Iranian women, the toughening of the laws was unacceptable overreach, which culminated in the death of Amini.

Raisi publicly called for a “steadfast investigation” into the death of the young Kurdish girl. Speaking at the sidelines of the UN general assembly on Thursday, Raisi emphasised that the authorities are “preoccupied with the safeguarding of the rights of every citizen”, before taking the opportunity to accuse the west of having “double standards” when it comes to human rights.

In another tone-deaf move on Thursday, Raisi refused a previously agreed-upon interview with CNN anchor Christiane Amanpour, after making a last-minute request for the British-Iranian journalist to wear a headscarf during their interview.

Amanpour, a fluent Farsi speaker who grew up in Tehran, stated that she always wears a headscarf in Iran, complying with local laws and customs, but expressed her shock that Raisi would demand the same in the US.

For London School of Economics’ Roham Alvandi, the election was Islamic Republic’s “Rastakhiz” moment – referring to the former Iranian Shah’s creation of a one-party-state in 1975. “Just as (it) is seen in retrospect as the high-point of authoritarianism and a grave mistake, so too will this election come to haunt the Islamic Republic,” Alvandi predicted in 2021. The coming days will show whether his prediction will hold.