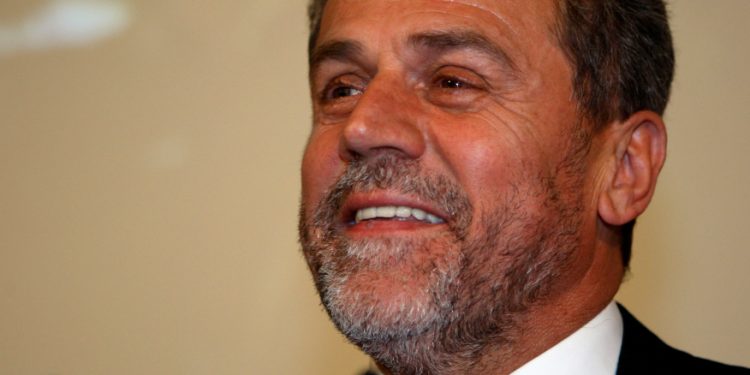 FILE - This Monday, Dec. 28, 2009 file photo shows Zagreb's mayor Milan Bandic reacting at his campaign headquarters in during presidential elections in Zagreb, Croatia. Bandic, the controversial long-serving mayor of Croatia’s capital of Zagreb, has died from a heart attack, his office said Sunday, Feb. 28, 2021. He was 65. Bandic felt unwell late Saturday and was swiftly taken to a hospital but nothing could be done, the state HRT television reported. (AP Photo/Darko Bandic, File)

Brussels (Brussels Morning) The sudden death of the long-time Mayor of Zagreb, Milan Bandić, at the age of 66 has left a potentially destabilising power vacuum in the Croatian capital and in the national politics of Croatia. After more than 21 years in office, Bandić was the longest-serving mayor of any of the world’s capitals.

Bandić served six terms as a Mayor going back to 2000, and was considered a serious contender in the upcoming local elections in May. The position of Zagreb Mayor is often considered the second most powerful executive role in Croatia, because of the direct influence the incumbent can exercise over the capital’s two billion euro annual budget.

A controversial figure, Bandić retained popular support despite more than 250 criminal investigations and cases that targeted him during his career Some 13 processes were still ongoing at the time of his death, most of them related to graft and illegal use of city funds.

His party, named after him, was publicly a one-man show and so is considered unlikely to maintain national or even local importance. However, it held disproportionate power both before and after the 2020 parliamentary elections. The 2016 parliament saw, the number of deputies in his caucus grew from 1 to 10, as defectors from other parties joined him. Bandić publicly called them “his little chips”.

After the 2020 elections, Bandić retained an indirect role as kingmaker because two loyal national minority deputies of his propped up the razor-thin majority of the centre-right Croatian Democratic Union (HDZ) government.

With the approach of local elections in May, Bandić was no longer seen as a favourite since an increasing majority of Zagreb’s citizens appearing to be willing to vote against the man and his party, with Tomislav Tomašević, leader of the civil initiative “We Can!”, topping the most recent polls. However, since Tomašević’s popularity mostly stemmed from his opposition to Bandić’s rule, analysts now warn that the coming elections have become more difficult if not impossible to predict.

Croatian politicians admired Bandić for his ability to evade ideology, reflected in his success at cooperating with both sides of the political spectrum, despite having started out as a member of the centre-left Social Democratic Party (SDP). Bandić was credited with creating the party’s city chapter and bringing it to power in 2000. After he was expelled in 2009 for running for president of Croatia as an independent, most of the key people in the local chapter followed him, with more defecting in following years, regularly securing him a majority in the City Assembly.

Bandić maintained good relations with Russia, developing a close friendship with the former Russian Ambassador to Croatia Anvar Azimov. In 2018, he was awarded and received the Order of Friendship medal from Russia’s President Putin in Moscow. .

He was a target for numerous investigations by the Croatian anti-corruption police USKOK, and was arrested in 2014 along with a large number of his associates in a graft case tied to Zagreb’s waste disposal system. He was soon released on bail, returned to prison for attempting to pressure a key witness, then released again by the Constitutional Court which ruled that the pressure he applied was legal. Later he would say “anyone who is worth anything in Croatia spent at least three months in jail”.

The case remained mired in the notoriously slow Croatian judiciary system, making its way to the Supreme Court and back, with the next hearing scheduled for next week, while Bandić remained in office during the entire time of the ongoing process.

He famously divorced and then remarried his wife in the late 1990s so she could apply for a city apartment as a single woman. After his arrest, the media found out he had multiple unreported apartments and real estate holdings, the value of which far outstripped his reported income.

His continued popularity in Zagreb is attributed to a combination of factors, including notably a network of cronyism, which carefully controlled and distributed coveted city administration jobs, while awarding tenders and concessions, and being a visible and constant presence in the field, taking credit for every road work project and every new construction.

His opponents, political analysts and economists are concerned that city finances may not align with reports. Some believe the city could be hundreds of millions of euro in the red. His successor will face a number of serious problems, not least of which is reconstructing the city after the devastating earthquake which damaged most of the historic centre in March last year.

Prime Minister Andrej Plenković expressed his condolences to Bandić’s family and associates, acknowledging the role they played in developing the capital. “We will remember him for his inexhaustible work energy and enthusiasm”, Plenković declared.