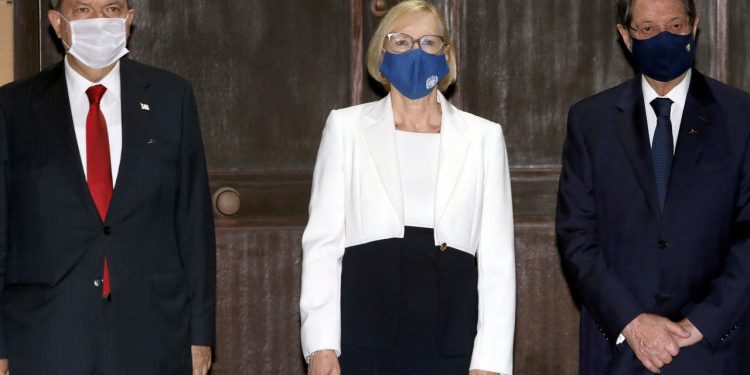 Brussels (Brussels Morning) Cyprus President Nicos Anastasiades and the President of the de facto state Northern Cyprus Ersin Tatar held a meeting on Tuesday in the UN Buffer Zone in Nicosia. They pledged to support the UN’s Cyprus peace push with Greece, Turkey and the UK, FRI reported.

In a statement, the UN pointed out that the two leaders expressed determination to support UN Secretary-General António Guterres’ commitment to organize an informal five-party summit with Greece, Turkey and the UK. The statement did not specify when further talks would take place.

Anastasiades noted that the two leaders did not go into details but noted that Tatar had expressed willingness to take part in the summit while adding that other ideas should be proposed. The two-hour informal meeting between the two leaders took place at the residence of Elizabeth Spehar, the head of the United Nations Peacekeeping Force in Cyprus (UNFICYP) in the UN Buffer Zone. Anastasiades said he had raised the issue of the Varosha quarter of Famagusta, which Tatar reopened in October. Tatar, he added, in turn raised the issue of hydrocarbons.

The EU has criticised Turkey for its hydrocarbons exploration in disputed waters in the Eastern Mediterranean, and has warned Ankara against further provocations. Anastasiades previously described the reopening of Varosha as a violation of international law, representing an obstacle to continuation of the peace talks.

The last UN-sponsored Cyprus settlement negotiations were held in Switzerland in July 2017. Cyprus has been divided since the Turkish invasion in 1974. Under the 1960 Treaty of Guarantee, which Cyprus signed to gain independence from UK rule, Greece, Turkey and the UK are the guarantor powers of the island’s sovereignty.

Tatar narrowly won presidential elections against his predecessor Mustafa Akıncı on 18 October, amid heightened tensions over Turkey’s exploration activities in the Eastern Mediterranean. Akıncı supported reunification of the Turkish Cypriot north with the Greek Cypriot south, whereas Tatar advocates a two-state solution. The north depends on Turkey economically and politically and is an important part of Turkey’s strategy in the Eastern Mediterranean.

The division on Cyprus is the main source of friction between Greece and Turkey, two NATO allies entangled in a separate dispute over demarcation of energy exploration rights in the Eastern Mediterranean, Reuters reports.