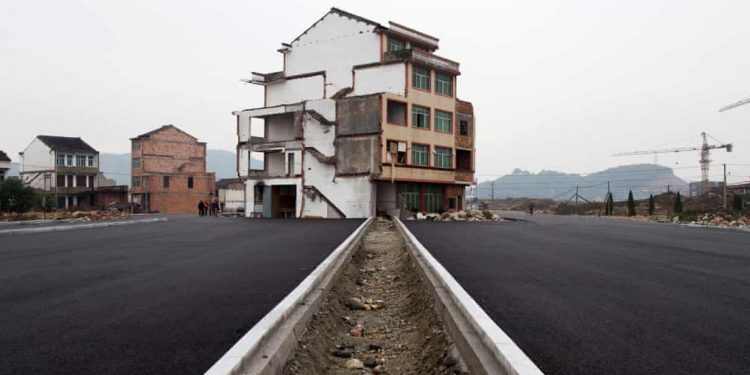 They stand as eyesores to most passers by and potential public health risks to authorities, decaying buildings wrapped in tangles of exposed wire, studded with protruding leaky plastic pipes, vegetation billowing from cracks and terraces where particulates from polluted air have accumulated over time.

With skyscrapers and ultramodern developments on every side, some of these “nail houses” are also sitting on land worth millions of dollars in Shenzhen’s inferno of a property market, where new-unit and second-hand home prices rival London.

In battles over land and development, the nail house phenomenon has become widespread throughout China over the past two decades, with owners of the structures refusing to move to make way for new construction projects until they receive what they believe is their rightful compensation.

In rural areas, that may not be much, but in Shenzhen it can amount to an instant ticket to riches if cashed in at the right time.

Sandwiched between two 20-plus storey residential complexes in the heart of Shenzhen’s Louhu district sits one such building that has fallen into disrepair.

The three-storey building now essentially has no development value after its owner held out too long. It’s most likely fate is to become a parking lot.

“The owner is still asking for around ¥100m (£11m),” a middle-aged woman who rents in the building told the Guardian, declining to provide her name. “But now it is nearly worthless. He can’t sell it.”

The South China megacity of around 18 million people is hoping that a new proposal will rid the city of nail houses for good and bring to an end land disputes that can sometimes drag on for a decade.

The plan would greenlight projects if 95% of the owners agreed to relocate. The previous policy required all owners to approve, often leading to a handful of holdouts hoping to secure higher compensation.

The draft policy also sets minimum standards for the payout, which translates into either a home or homes of equivalent size and value elsewhere in Shenzhen, or cash payments based on space and current property values.

But the move has raised concerns about the rights of residents.

“For me, that a project can proceed if 95% of the owners agree is a form of abuse of power,” an independent researcher and activist who has been involved in drawing awareness to the rights of renters and migrant workers in Shenzhen’s urban villages for over a decade told the Guardian.

“The phenomenon of nail houses is usually the result of a lack of transparency and the owners fearing their interests might be damaged,” he said, only agreeing to an interview on the condition his name would not be used because he has been visited repeatedly by police and told not to talk to the media.

“I don’t want to see any individual’s interest suffer in the process of pursuing the city’s interest as a whole, because when that happens, both the individual’s and the greater interest will both be undermined,” he said.

Qiao Shitong, an assistant law professor at the University of Hong Kong who has studied the city’s small property system extensively, said Shenzhen has tried to move forward similar policies in the past, but had too much pushback from property owners and village committees.

“But this one might be successful,” Qiao told the Guardian by phone. “People appear to think it is more reasonable to do it this way now.”

Qiao says the plan may be a craftier way for the municipality to deal with reluctant sellers because it removes the city and the developers from much of the debate and pits neighbour against neighbour.

“Before it was a conflict between developers and nail house owners, and now under this policy it would be a conflict between you and your neighbour,” he said. “It is becoming more common to use peer pressure to solve these issues.”

The policy allows for arbitration in court if disagreements arise, though there is no certainty about how the courts would handle those cases or how transparent they would be.

For the millions of migrant workers who come to Shenzhen to work in factories, or as taxi drivers, cleaners, restaurant workers, and all manner of low-pay service industry jobs, buildings like these provide a cheap place to live that is close to their source of work. As the city redevelops the central business district these options are becoming more scarce.

The independent researcher estimated that around 60% of the nearly 900 development projects across the city have been approved, with only the building owners standing in the way.

“If these projects are carried out in the coming five years, the number of people affected will be from around 4.5 million to 7.25 million,” he said.

Back at the Louhu nail house, asked what she would do if forced to move if the building was redeveloped, the woman, now vigorously washing a duck carcass in a plastic bucket, appeared resigned.

“I’ll just have to move further out,” she said.