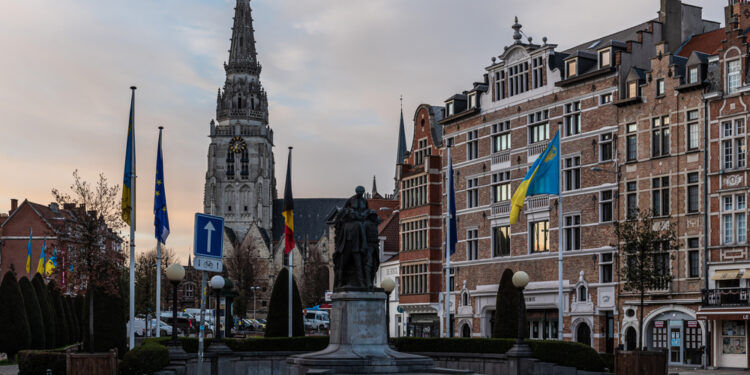 Brussels, (Brussels Morning)-  An action by VéloFiets Anderlecht for the circulation plan in Cureghem led to heated discussions on Saturday morning between supporters and opponents of the new mobility plan.

Soon after the introduction of the circulation plan in the Anderlecht district, mass dissatisfaction with the new traffic situation followed, although this is a test phase. A petition against the Good Move plan that should transform Cureghem into a car-free neighbourhood already has more than 5000 signatures, but the organisation VéloFiets Anderlecht wanted to show on Saturday that not everyone from the neighbourhood is against the plan.

“Over the past few weeks, a lot of noise has come from the opponents, but we want to emphasise the increased quality of life and improved safety with this action,” said organiser Christian Smets. “It is not the intention to enter into a confrontation.”

‘Almighty of the street’

It was no coincidence that the event took place on Kliniekstraat at the Clemenceau metro station, an axis that has partly been converted into a pedestrian zone since the circulation plan was launched. But this new reality is not taken very seriously by many car drivers. Also during the action, several drivers ignore the new pedestrian zone and drive through it smoothly. The demonstrators are forced to divert to the footpath.

“It is impossible for the street to be in charge”, says Smets to a BRUZZ reporter. “This pedestrian zone must be respected, otherwise you gnaw at the feet of democracy. The fact that the police present refuse to make people aware that they are driving through a pedestrian zone is unacceptable. We cannot leave the neighbourhood to the omnipotence of the street.”

Half an hour after the start of the action, the police officers present decided to send drivers who want to drive into Kliniekstraat in a different direction. Meanwhile, discussions between supporters and opponents of the mobility plan are intensifying.

“A lot of people are absolutely not happy with this plan,” said local resident Mouad. “We used to have shortcuts to get to our destination or home faster. Now everything is closed, especially on Sundays, when it is Zuidmarkt. I go to work by public transport, but for that I have to drop my children off at school. That now takes half an hour longer. Going shopping by car also takes much more time.”

Mouad believes that consultations should be held with a view to adjusting the circulation plan. “Ecology is important, but so is our well-being. We’re not involved and I think the people who made this plan don’t know the area.”

Local resident Pauline, who is also a member of cyclists’ association GRACQ, understands the dissatisfaction of her neighbours. “It’s a restriction of freedom, that’s true. But we think that this plan can be especially positive for the neighbourhood. It is a busy and densely populated area where people often do not have a terrace or garden and now space is freed up for children to play, while safety also improves.”

Proponents say that adjustments are possible, as long as they are not at the expense of quality of life and reduced transit traffic. “It is and remains a test phase, but of course you cannot try out a plan if it is sabotaged.”

By this, supporters of the circulation plan are referring to the relocated concrete blocks and painted road signs that made the traffic situation in Cureghem even more chaotic at the beginning of August .

“It is a long-term job and we know that not everyone receives the plan with open arms, but we do think that a test phase should be able to be tested in the first place,” said Stijn D’Hollander, chief of staff of Anderlecht’s alderman. Mobility Susanne Müller-Hübsch (Ecolo-Green)

Next year in June, the municipality of Anderlecht wants to approve a definitive circulation plan for the district.

“The current plan will be continuously monitored and we can make adjustments en cours de route if necessary . That is why we are asking for as many comments and suggestions as possible from residents in the neighbourhood,” says D’Hollander. The suggestions must then fit in with the philosophy of the regional mobility plan Good Move, it was said. “That is to say: keep traffic out of the neighbourhood as much as possible. There will be absolutely no change in our political position.”

Activist Gerben Van den Abbeele was also present. He describes on social media how the action ended. “The supreme moment of the action was when the local police urged those present to ‘clear up the pedestrian zone for car traffic’ again”.