Cunning or Clueless? Boris Johnson and the N.Ireland question 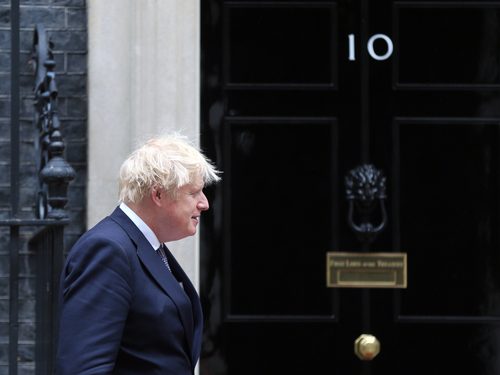 London (Brussels Morning) Boris Johnson’s current difficulties regarding Northern Ireland are substantially predicated on his characteristic dual failure when it comes to issues of substance: his inability or disinclination to grasp the details of a matter in the first place, making the secondary failure – not comprehending their gravity – much more likely. Northern Ireland seems to be a particular blindspot for him.

Johnson was repeatedly warned that his approach to Brexit could threaten the Northern Ireland peace deal, but proceeded regardless. Slightly surreally, his chief Brexit negotiator Lord David Frost is now raising the alarm on this issue and presenting it to the European Union as if it were hot off the press.

This turn of events was fairly predictable, since there’s been little indication that Johnson understood the main points, let alone the nuances, of 1998’s Good Friday Agreement.

The Times journalist Rachel Sylvester has spoken of how, in her first encounter with Johnson when she was a junior reporter for the UK’s Daily Telegraph in the years immediately prior to the agreement, he didn’t know – or at least pretended not to know – which side was which during the ongoing troubles in Northern Ireland.

It’s certainly possible he actually didn’t know. After all, Conservative MP Karen Bradley became Secretary of State for Northern Ireland in 2018 even though she cheerfully admitted she hadn’t been aware of how the sectarian split in the province worked politically, an admission which astonished all sides. Although that ol’ standby, that her comments were ‘taken out of context’, was subsequently trotted out, it’s difficult to conceive of a context where such an admission for someone in her role could be considered forgiveable.

During his interminable pitch for the British premiership, both official and unofficial, Johnson certainly steered clear of the issue of Ireland in relation to Brexit and made no mention of it even in his much-trailed keynote speech on Brexit as Foreign Secretary on Valentine’s Day 2018.

Yet the issue deserved to be treated with paramount importance, not as some optional bolt-on; the Good Friday Agreement achieved what many politicians and commentators on the different sides of the Northern Ireland political divide thought unattainable; namely, a relatively comfortable co-existence of the competing claims of nationalists and unionists upon the province.

The agreement simultaneously acknowledged that the majority of the people in Northern Ireland at that time still wanted it to remain part of the United Kingdom, but that a substantial minority of the province – as well as a majority within the populace of the island of Ireland – wanted it to be united.

The agreement allows for a referendum on this question to be held “at any time” that it appears likely to the British Secretary of State “that a majority of those voting would express a wish that Northern Ireland should cease to be part of the United Kingdom and form part of a united Ireland.”

It established a devolved power-sharing administration, and allowed for the creation of the North-South Ministerial Council, to facilitate better relations between Northern Ireland and the Republic of Ireland, with an open border seen as a key component of the new settlement.

The agreement was overwhelmingly approved by of in two referendums held on 22 May 1998. Voters in Northern Ireland were asked simply whether they supported the agreement. In the Republic of Ireland, voters were asked whether they would accept the necessary constitutional changes to give up their country’s territorial claim to the north.

The UK government also agreed to demilitarisation and the removal of many of the security installations which had grown up during the three decades of the Troubles, including watchtowers along the border as part of “the development of a peaceful environment.”

Having already clinched the seemingly impossible with the central planks of the agreement, these other, once-unachievable aims of demilitarisation and normalisation also began to look far from insurmountable, especially within the context of the Republic of Ireland and the UK’s ongoing membership of the EU; the border could be de-emphasised, backgrounded, and the squaring of the circle between republicans and unionists could be further enabled in terms of co-existence without anything like the friction of the previous thirty years.

In 1998, the idea of the UK leaving the EU was confined to the very fringiest fringes of political discourse. Yet the process had arguably already been set in motion, not least by Boris Johnson himself, making up stories about the EU; after he was sacked by The Times newspaper for a fabrication, he became the Telegraph’s Brussels Correspondent and proceeded to do exactly the same thing: the EU wanted to ban prawn cocktail crisps, he said. They wanted to stop children blowing up balloons. Standardise coffins and condoms. They wanted to ban overly-bendy bananas.

By the era of the Brexit referendum five years ago next week, articles in some UK tabloid newspapers were regularly reporting that immigrants rather than the government’s austerity cuts were the reason for shortages in services, including in the National Health Service, aiding and abetting the Johnson-led ‘Leave’ campaign, whereas research from the same period appeared to demonstrate the financial benefits of immigration.

Once Brexit became an approaching reality, Johnson at least paid lip service to protecting peace in Northern Ireland, despite having rejected concerns over the Irish border issue when asked about it during the Brexit referednum campaign as part of “Project Fear”.

But those that believed Johnson was merely applying his regular faux-naif act to the topic of Northern Ireland and somehow had a masterly grasp of the facts behind the scenes received a shock when he demonstrated a genuine lack of understanding in spectacular fashion; to almost universal mockery, as Foreign Secretary in February 2018. He insisted that the issues of the EU’s land border with the UK in Ireland were no different from applying a traffic congestion charge between London boroughs.

As Prime Minister, Johnson eventually signed up to the Northern Ireland Protocol, which involved much of the same sleight of hand as the delicate situation in the territory has often required; the arrangement meant that the country would effectively remain inside the EU’s single market and customs union, despite legally no longer being part of it.

This created a de facto customs border at the Irish Sea and the need for checks at ports. Johnson was dismissive of enraged unionists, who believed that drawing a legal distinction between Northern Ireland and the rest of the UK pushed the province closer to union with the Republic of Ireland. Lord Reg Empey, who’d been chief negotiator of the Ulster Unionist Party during the Good Friday Agreement, described it as the most significant change that had occurred since the partition of Ireland a century earlier.

Despite dismissing these strong unionist concerns, Johnson and Lord Frost now seem to be upset and surprised that the EU is insisting on actually applying the terms of the agreement and that checks on goods such as chilled meats and other items are taking place. This sentiment of astonishment is echoed by their many Conservative Party colleagues, not least Trade Minister Ranil Jayawardena who commented in an extraordinary example of jingoistic tabloidese: “it is wrong that anyone should be threatening the British sausage. We will stand up for the British sausage and no one will ever be able to destroy it.”

Johnson said in an interview that that what the Protocol involved had not been laid out clearly to him which, if true, suggests he may not have read it, or at least had not understood what he was reading.

He further wheedled that he didn’t think that the “interpretation” or application of the protocol was “sensible or pragmatic”, which further confirms his likely failure to read or at least understand an extremely important and repercussive document that he had signed. His press allies insisted the EU was the aggressor here, trying to separate Northern Ireland from the rest of the UK, despite the UK government’s previous dismissal of unionist concerns on the issue of the potential separation. Indeed, prominent unionist voices have since reiterated that the PM had been made very aware of these issues and their concerns.

The price to be paid, as Lord Frost is now belatedly shrieking, may be very high in terms of the peace in Northern Ireland. But also, from a unionist perspective, the price may be the ultimate one; the information in Northern Ireland from the recently-conducted census is still being collated, but in the previous census in 2011, protestants – who are overwhelmingly unionist in outlook –  dipped below half the population at 48%. The overwhelmingly  nationalist catholics were up to 45%.

It was predicted by some experts several years ago that catholics may have become the majority by now. The new census’ figures will soon tell us. Johnson’s aforementioned inability or disinclination to grasp the detail, to fully comprehend linkage and consequence, may have given the issue a final tilt towards a republican majority.

It comes back to the sections of the UK media overestimating Johnson’s ability and imagining he must have some exceedingly clever masterplan up his sleeve, explaining the obvious disconnection between reality and his rhetoric. Similar claims were often made, of course, for former President Trump before it became clear to all but the most credulous that he was simply ignorant and clueless.

It’s highly possible that when it comes to Johnson and Northern Ireland, to use colloquial British English, the British Prime Minister simply doesn’t have a bleedin’ clue what ‘e’s doin’.