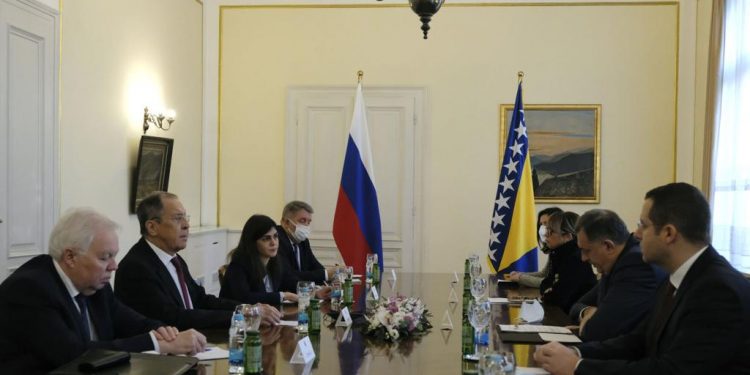 The two Croat and Muslim BiH Presidency members Željko Komšić and Šefik Džaferović boycotted a meeting with Lavrov because they claimed he had shown a lack of respect by meeting with the Serb representative in the Presidency.

Lavrov was to meet with all three Presidency members on Tuesday, the second day of his two-day visit to BiH, but only Milorad Dodik, the Serb representative, showed up. Komšić and Džaferović said Lavrov had attended a prior meeting with Dodik on his arrival the previous day, where he had expressed support for Dodik’s opposition to NATO membership and proposed changes to the Dayton Agreement, which had ended the Bosnian War at end 1995.

The two maintained that Lavrov should have started his visit in Sarajevo, the capital, rather than in the semi-autonomous Serb half of BiH. According to Komšić, their decision not to meet the Russian FM was because of the disrespect he had shown the day before by addressing a press conference with no BiH flag on display and praising Dodik’s claims that the country would never join NATO.

Lavrov should have known that it was not up to Dodik to decide whether BiH joins NATO, Komšić said. He insisted that BiH “will not agree to become a Russian pawn in the Balkans in their games and conflicts with the EU countries or NATO member countries.”

Speaking in neighbouring Serbia after his visit to BiH, Lavrov dismissed the incident as unimportant for relations between Russia and BiH. Komšić and Džaferović, he said,  “are not independent, they obviously work under someone’s instructions.”Lavrov’s visit to the Balkans coincides with the 25th anniversary of the signing of the Dayton Agreement, which left the country divided between the Serb entity and the Federation of Croats and Muslims. Speaking on Monday, the Russian FM warned against any changes to the Agreement, in reference to calls from Western and BiH politicians for upgrades to allow the country to implement reforms.