Creeping Protectionism and the WTO 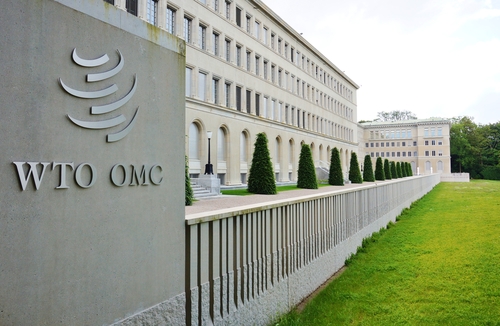 GENEVA, SWITZERLAND -5 JUNE 2016- The headquarters of the World Trade Organization (WTO) is located in Centre William Rappard along Lake Geneva.

The US administration is poised for a smarter balancing of its trade deficit, probably through monetary policy rather than tariffs.

Berlin (Brussels Morning) Many free trade apologists are convinced that creeping protectionism is one of the biggest problems facing the global economy. Trump with his tariff increases was by no means an outlier, because his successor also lacks clear commitment to free trade and has so far not tackled the dismantling of Trump’s tariffs.

Great hopes are still associated with the World Trade Organization (WTO). If this institution were revived, the march toward protectionism could be stopped. But this is a mistake. It is not the WTO that is the problem, but the belief of many governments that free trade can exist today without much broader multilateral or bilateral agreements.

There is no denying that the WTO in Geneva is becoming increasingly politically irrelevant. Not only did Donald Trump ignore and boycott it, more and more bilateral agreements are taking the place of a comprehensive multilateral framework. The organisation appears to have run out of “natural” roles since the tariffs that countries used to protect their markets have largely been dismantled. But, free trade advocates argue, there are plenty of non-tariff trade barriers that the WTO could address. But this is a misconception.

The WTO was a suitable forum for negotiations only as long as it was concerned with dismantling tariffs imposed by many sides by mutual agreement. With the disappearance of tariffs, the WTO has also had its day. This is actually easy to understand, but the underlying logic is studiously ignored by both the free trade apostles and the opponents of multilateral agreements. For example, Boris Johnson’s belief that Britain could simply rely on membership in the WTO after membership in the EU to continue to enjoy free trade to the fullest was incredibly naive.

A multilateral forum like the WTO, whose existence is secured by a single simple treaty (the former GATT), can be helpful precisely when, in order to achieve its goals, it does not have to interfere with the political circumstances of member countries. This was the case with tariffs, because the removal of a tariff barrier had no implications other than its impact on a usually manageable group of companies and on the government budget. If a government could argue that burdens on one group of producers were at least offset by relief for another, tariff reductions were usually a good sell.

It is quite different for most non-tariff barriers. If a government, to use a famous example, gives a subsidy in the form of a heavily discounted piece of land to a large domestic company that also exports for “regional policy reasons,” the WTO has no leverage whatsoever to act against it because its treaty simply does not allow it. But even if it wanted to, it would never have the capacity to examine for each individual country whether or not such a subsidy entails a distortion of trade flows.

That’s a simple case to boot. It becomes much more difficult in the case of national standards that hinder foreign competitors, such as health or environmental regulations that can be well justified nationally, but make it much more difficult for foreign companies to enter a particular market. The possibilities for throwing sticks between the legs of a competitor are almost infinite if one wants to get as much as possible out of “free trade” in the sense of surplus demand from abroad for oneself, i.e. one’s own nation, without ever having to fear a complaint to the WTO.

This means nothing other than that the whole idea of free trade based on the rules of the WTO is a chimera. There can only be an expansion and deepening of trade between nations beyond the WTO if the nations concerned sit down together and, in extremely arduous and extremely protracted negotiations, consider, point by point, whether there can be further liberalisation. They have to eliminate, piece by piece, national regulations that could impede the opening of the market. This is the brave new world of bilateral trade agreements, which do not look like renunciations of sovereignty, but are just that to a much greater extent than membership of the WTO and acceptance of its rules.

Such agreements may still be acceptable when concluded between partners of equal strength, but they systematically amount to diktats of the stronger when, for example, the European Commission or the United States sits at the table with developing African countries. In the now notorious European Partnership Agreements, the developing countries are confronted with conditions that are regularly massively detrimental to them. However, they are enticed – supported by 90 percent of the economist community – with the miraculous effects of free trade, which are supposed to lead to the proverbial blooming landscapes in every country sooner or later.

What is to be done?

Anyone who wants to change these conditions must first make a decision. Those who, like Boris Johnson, want to be at least formally sovereign will simply wait for the benefits of free trade to fall at their feet. He won’t even think about getting involved in complicated and protracted negotiations with a wide variety of partners. This waiting, however, can last until doomsday, while in the meantime the partners use every trick in the book to gain every advantage they can think of.

If you really want free trade, you have to make a deal that goes far beyond the deal you make when you join the WTO. This deal could be called a single market, namely creating similar conditions in every country. But then you would suddenly be back in a construct like the EU. Only an institution like the EU Commission, provided with all possibilities and all necessary power by the national governments, can (and is allowed to) check whether the sale of a piece of land is a prohibited subsidy or not. This is the only way to ensure conditions in the brave new world without tariffs that are perceived as fair by all trading partners. Free trade exists only with precisely the relinquishment of sovereignty that Boris Johnson did not want.

But the EU rulebook also suffers from a huge loophole that Germany has shamelessly exploited. The rulebook contains no rules on the development of wages and unit labour costs, although that is precisely what would have been necessary with the start of European monetary union. Because countries can use political pressure on national wage development and thus national unit labour costs to increase the competitiveness of all their companies and thus gain absolute advantages in international trade, there are fair conditions for trade in the case of a common currency only if member states are partially deprived of sovereignty in wage determination.

Trump’s tariff policy seemed to many like a relic from another, older world. But it was consistent. Where tariff reductions are no longer negotiated, tariff increases must be rediscovered as an instrument if mercantilists like Germany, who are bent on current account surpluses and can also hide behind a monetary union, are to be put in their place. However, the fact that one is called a protectionist if one wants to reduce one’s trade deficits and takes action against mercantilists shows the subterranean level at which the whole discussion is being conducted.

Although he could not hit Germany directly in the EMU, it would still have been advisable for Trump to use his dollar machete to show Europe that the U.S. is not willing to accept deficits in perpetuity. The U.S. is, after all, one of the few nations in the world large enough to give the “right direction” to the valuation of its currency. A significantly devalued dollar might have led the rabbit-footed European governments to openly brand the elephant in the room of the European single market, namely Germany. It seems that Joe Biden’s administration understands this context well and will sooner or later present the bill to the true protectionist, who still masquerades as a free trader.