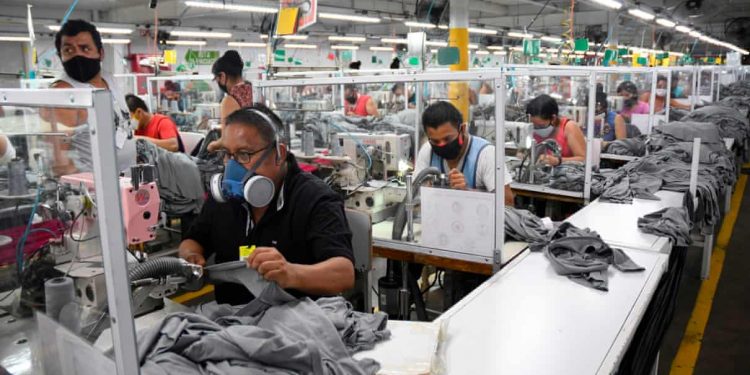 A garment factory supplying Gap, American Eagle and Amazon was at the centre of one of the worst Covid-19 outbreaks in Guatemala, the Guardian can reveal.

More than 200 people tested positive for Covid-19 at the KP Textil factory, exposing the dire working conditions inside the country’s maquila system of free trade zones. At the time of the outbreak, the factory was making masks for export to the US.

Human rights activists said that KP Textil, on the outskirts of Guatemala City, lacked adequate health and safety measures to prevent an outbreak, despite the management saying it had closed the factory on 12 May after the first case of Covid-19 was detected.

The following day, the factory denied full entry to inspectors from the health ministry and the Guatemalan Social Security Institute (IGGS) on the grounds that the premises were private property and that testing would interfere with production.

When an inspection went ahead on 14 May, 26 out of a sample of 32 workers tested positive for Covid-19. The local mayor, supported by the municipal court of San Miguel Petapa, shut the factory down indefinitely and declared a state of emergency in the municipality.

When all 900 workers were tested, 201 positive cases were reported. The virus outbreak went on to cause the death of at least one KP Textil garment worker.

Despite numerous approaches to KP Textil for comment, no one responded. The ministry for labour declined to comment.

But in a radio interview in May, Rolando Reyes, from KP Textil, said: “We started taking measures from the beginning of March. We were among the first in adopting hygiene and safety protocols, implementing the use of masks, hand sanitiser and such things for all the workers.”

Luis Daniel Reyes, workers’ advocate for Guatemala’s Human Rights Ombudsman, said: “KP Textil was the maquila flagship for the contagion. In Guatemala, the biggest and most numerous infections occurred there, at KP Textil.”

Mayor Mynor Morales, whose San Miguel Petapa constituency is one of the most densely populated in the country, said: “When we did the [first] testing we understood there was a world of infected people.

“When we closed KP Textil, everybody went home. We followed the route to their families… in fact, there were two deaths of relatives of people who work in the maquila.”

Across Central America, the Maquila Solidarity Network estimates that 390,000 people work in free trade zones, about 60,000 of them in Guatemala, where the workforce is nearly 60% women, typically aged between 15 and 35.

Despite the billions of dollars generated in the zones, Guatemala’s garment workers have been left particularly vulnerable to coronavirus, and are unable to save for times of sickness or unemployment.

Only two maquilas in the country have trade unions as attempts to organise have been met with violence and dismissal. The pandemic has exposed the brutal conditions workers have to endure.

“It has become a butchers’ shop for the poor maquiladora people,” said Luis Armando López, general secretary of the Central Guatemalan Workers Confederation (CGTG). Most maquilas have not followed health measures imposed by the government, he said, adding that workers are having to buy their own masks and hand sanitiser.

None of the workers approached by the Guardian would talk openly about their experiences.

“Out of fear, many workers don’t denounce their employers,” López said.

Homero Fuentes, from local NGO Coverco, has documented conditions inside the maquilas since the virus appeared in Guatemala. He said of the 89 factories investigated in the country, just two had followed all the safety protocols.

Although clothing production was not classified an essential service, Guatemala’s maquilas have been allowed to remain open since March with permission from the ministry of the economy.

Zulma Calderón, health inspector at Guatemala’s Human Rights Ombudsman, said control measures should have been implemented around the factories “not just as a control measure to identify cases and contacts, but also as a protective measure for the rest of the community”. But, she said: “That did not happen. The country never had economic closure as such, and neither vigilance or control measures by the state or the ministry of labour.”

Stephen Wishart, Central America programme director at the Solidarity Centre, said government and factory owners must take responsibility for their workers, and so must the brands buying the products. “During Covid, the brands continued to put orders into these factories – the government wasn’t doing anything to ensure that health and safety mechanisms were being enforced.”

Gap and American Eagle both said they were working closely with KP Textil on safety measures, including using preventive barriers and face shields, improving sanitation and testing workers before they return to work.

Ahead of the reopening, Morales said he had visited the factory and seen that KP Textil was “putting things in order”. “After what happened to them I hope they learned a very good lesson and it never happens again,” he said.

Gap stated that it had based its Covid-19 advice “on information from public health and work safety experts … We have been in close contact with labour rights organisations, including Maquila Solidarity Network, as part of our effort to ensure that KP Textil most effectively mitigates the impacts of Covid-19 on their workers,” it said.

American Eagle said it takes seriously the questions raised about KP Textil and had been in regular communication with the factory over past few months. “KP Textil has taken a number of positive actions to address the concerns in cooperation with government authorities.”

Amazon said it has “provided extra funding to help suppliers and their workers access helplines, purchase personal protective equipment, and receive health and safety training. We take the allegations against KP Textil seriously and have immediately launched an investigation. If we find violations, we will quickly drive corrective action.”