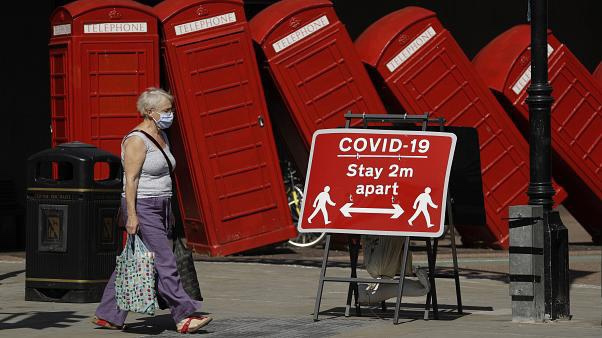 Britain has entered the deepest recession since records began as official figures on Wednesday showed the economy shrank by more than any other major nation during the coronavirus outbreak in the three months to June.

The Office for National Statistics (ONS) said gross domestic product (GDP), the broadest measure of economic prosperity, fell in the second quarter by 20.4% compared with the previous three months – the biggest quarterly decline since comparable records began in 1955.

After a decline of 2.2% in the first quarter, the figures confirm the UK economy plunged into recession after the Covid-19 outbreak spread in March and the government imposed a nationwide lockdown to contain it. Economists consider two consecutive quarters of shrinking GDP as the technical definition of a recession.

After resisting the launch of lockdown controls until later than other countries around the world and relaxing them at a slower pace, the ONS said the UK had plunged into the deepest decline of any G7 nation in the second quarter.

Britain’s decline was more than double the 10.6% fall in the US over the same period and also surpassed declines in France, Germany and Italy among G7 nations that have reported second-quarter figures so far. Canada and Japan have yet to publish second-quarter data but are not expected to record greater falls than Britain.

Rishi Sunak, the chancellor, said: “I’ve said before that hard times were ahead and today’s figures confirm that hard times are here. Hundreds of thousands of people have already lost their jobs and, sadly, in the coming months many more will. But while there are difficult choices to be made ahead, we will get through this and I can assure people that nobody will be left without hope or opportunity.”

Confirming the onset of the deepest recession since records began, the ONS said the decline in the second quarter was widespread, with a dramatic plunge in output across the services, production and construction industries. Reflecting the public health restrictions and forms of voluntary physical distancing in response to Covid-19, it said the pandemic had erased 17 years of economic growth in only two quarters – taking the level of GDP back to the equivalent position in June 2003.

Britain’s dominant services sector – which includes hotels, restaurants and finance – recorded a 19.9% plunge on the quarter, while the construction sector declined by 35%. The production industries – which include manufacturing, mining and energy provision – fell by 16.9%.

Spending in the economy by households and businesses plunged by a quarter as lockdown measures forced people to stay at home, shops closed, building sites fell idle and factories paused production.

However, monthly figures for the economy indicate that Britain’s economy continued to recover from the pandemic in June as lockdown measures were gradually relaxed and pent-up demand fuelled a rise in consumer spending. GDP grew by 8.7% in June compared with the previous month – faster than expected by City economists.

The latest snapshot confirmed growth returned in May and strengthened in June, although not by enough to offset a dramatic collapse in output in April during the first full month of restrictions on business and social life, which was deep enough to push the economy into negative growth across the quarter.

Jonathan Athow, the deputy statistician for economic statistics at the ONS, said: “The recession brought on by the coronavirus pandemic has led to the biggest fall in quarterly GDP on record.

“The economy began to bounce back in June, with shops reopening, factories beginning to ramp up production and housebuilding continuing to recover. Despite this, GDP in June still remains a sixth below its level in February, before the virus struck.”