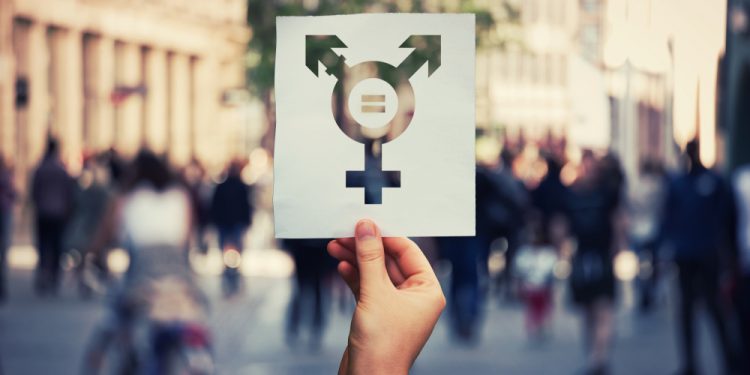 Hand holding a paper sheet with transgender symbol and equal sign inside. Equality between genders concept over a crowded city street background. Sex rights as a metaphor of social issue.

London (Brussels Morning) A UK High Court ruling has found that under-16-year olds experiencing gender dysphoria are unlikely to be able to give informed consent for a prescription of puberty-blocking drugs.

The 19-page judgment also said that court intervention may be needed in the case of 16-18-year-olds seeking treatment.

The case was brought against Tavistock and Portman NHS Trust in London — the UK’s sole gender-identity development service — by 23-year-old Keira Bell, and the mother of an autistic 15-year-old awaiting treatment.

Bell was prescribed blockers at the age of 16 prior to her male transitioning process but has since regretted her choice and is now detransitioning.

She says the clinic should have challenged her decision.

Mrs. A, whose daughter is on the waiting list for treatment at the clinic, argues that she fears she will also later regret that decision.

The claimants’ lawyers argued at the hearing that those who started taking puberty blockers would later take cross-sex hormones that lead to “irreversible changes”.

The trust has said the two processes were separate from each other.

One of the ruling judges, Dame Victoria Sharp, said it was ‘highly unlikely’ a child under 13 would be “competent to give consent” to taking puberty blockers. She also said it was “doubtful” that anyone 14 or 15 years of age could comprehend the long-term impact of doing so as well.

“The court is not deciding on the benefits or disbenefits of treating children with GD (gender dysphoria) with PBs, whether in the long or short term”, said the ruling.

“This judgment is not political, it’s about protecting vulnerable children”, said Bell.

“I’m delighted to see that common sense has prevailed.”

The trust said the ruling was “disappointing”, while Lui Asquith from trans children’s charity Mermaids called it “a potential catastrophe for trans young people across the country”.

“We believe very strongly that every young person has the right to make their own decisions about their body and that should not differ because somebody is trans”.