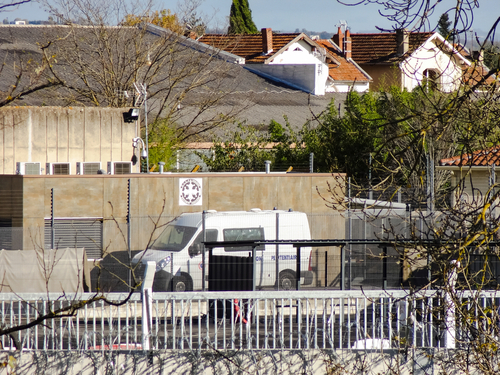 Albi, France - Nov. 2020 - A prison van of the "Judicial Escort" of the Penitentiary Administration of Toulouse, which depends on the French Ministry of Justice, parked inside Albi house arrest

Brussels (Brussels Morning) The Council of Europe’s rights body blasted the French prison system in a damning report released on Thursday, accusing the French authorities of allowing deplorable conditions in police detention facilities, general overcrowding in prisons, and “worrying” practices in the transfer and treatment of detainees in hospitals.

The Committee for the Prevention of Torture (CPT) visited prisons and detention facilities in France in December 2019, where representatives interviewed a number of inmates and detainees to determine their conditions. During their visits, they inspected 12 police stations, four prison facilities, and one psychiatric unit.

The CPT reported that French prisons had been overcrowded since 1991, with occupancy rates higher than 200% in some prison facilities. In December 2019, nearly 1,500 inmates had no beds available, and were expected to sleep on mattresses laid on floors.

Noting a wide difference between individual prison facilities, the CPT nevertheless warned that prisoners in disciplinary and isolation units were often housed in badly isolated cells, had little or no access to natural light, and had poorly equipped exercise yards, many of which were also too small.

Regarding police treatment of detainees, the CPT reports that some of the people interviewed claimed to have been deliberately beaten either during their arrest or during the time they spent in police custody. Some claim to have been victims of racist and homophobic slurs, or to have been threatened with weapons.

The Committee also expressed concerns over the practice of keeping persons suffering from severe psychiatric disorders in prisons due to the lack of appropriate care facilities. The CPT also noted that transfer and care of detainees in hospitals is still often performed in unacceptable conditions, with prominent use of shackles and escort staff present during consultations.
French authorities quickly responded to the report by claiming that much has changed for the better since December 2019, with prison population significantly reduced since March 2020 in an effort to curb the spread of the coronavirus. France also claims its prison capacity has been increased, while simultaneously exploring alternatives to prison sentences for offenders.