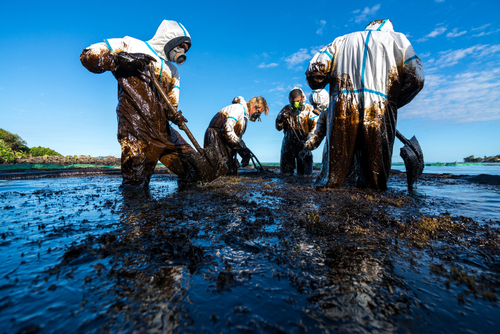 Brussels (Brussels Morning) A mysterious oil spill has threatened Corsica’s south-eastern coast, forcing five beaches to close so far, as investigators work all-out to determine the source of the leakage.

Detected during a military drill less than a week ago, the 35-kilometre-long slick, consisting of several tons of oil, has since broken apart to reach the shores of the French island. To the relief of the authorities, the largest remaining segment is drifting away from Corsica.

France’s BFM reports most of the oil has now been collected by cleaner crews. However, it remains unknown as to just how much oil remains and what the consequences would be for the Corsican coastline, as “globs” of oil are turning up on the sands of public beaches. Also, the Mediterranean maritime prefecture has reported observing very fine micro pellets during aerial surveillance of the spill.

The Marseille public prosecutor has opened an investigation into the spill. The authorities are now analysing weather patterns, sea currents and other key factors in attempting to identify the ship responsible for the spill. The working theory is that a ship had illegally “degassed” — emptied — its fuel-waste tanks within the Mediterranean, not long before the slick was first discovered.

Reportedly, as of now, three ships have been identified as potential culprits, with authorities planning to conduct interviews with several more ships’ crews in order to gather evidence and pinpoint the offending vessel.

Corsica was forced to evacuate five of its beaches on Monday and Tuesday, closing them off to the general public, as they were found to be contaminated by oil droplets. Authorities in the Gulf of Porto-Vecchio, a popular tourist destination, stated they are still awaiting lab analyses of both water and oil samples, to determine the earliest when the beaches can be reopened.
The spill is a significant concern for the local tourist industry, already strained by the coronavirus pandemic, as locals fear that news of pollution at the start of a tourist season might negatively impact the number of visitors planning to spend their vacation on the island.