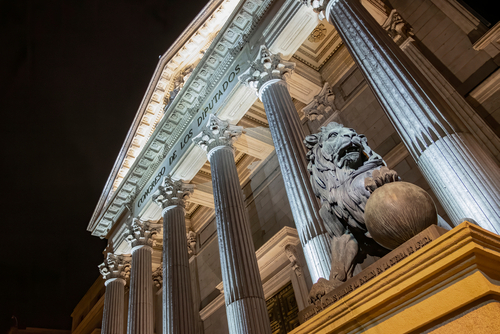 Night view of the main facade of the Palacio de la Cortes, palace of courts, seat of the Congress of Deputies in Madrid, Spain, with one of its iconic bronze lions in the foreground

Brussels (Brussels Morning) A high-stakes trial began in Madrid on Monday, as the public spotlight swung back to the illegal kickbacks scheme which has tarnished the image of the Popular Party (PP), Spain’s main conservative party, AP reports.

The latest trial is a continuation of the case that started in 2013, when allegations of the party’s shadowy accounting first surfaced in the media. After being a dominating presence in the Spanish politics for more than four decades, the party has since paid a heavy political price for corruption scandals tied to its members.

In 2018, former party head Mariano Rajoy was removed from office as the country’s prime minister after a court ruled that the party profited from a kickback scheme, which resulted in a lost confidence vote in the parliament.

The party’s long-time treasurer Luis Bácarenas, who  is currently serving a 29-year prison term for his role in that particular kickback case, returned to court on Monday to face further charges in a second trial along with four other defendants.

He faces having five years added to his jail sentence should the prosecution prove that the renovation costs of the party’s central office were paid partly with money from the illegal slush fund Bácarenas managed.

Uncomfortable for the party

The trial could cause fresh political damage to the party, given that Bácarenas pleaded guilty and threatened to reveal more details implicating party members, believing that his party reneged on its promise to defend his wife from prison in exchange for his silence. His wife Rosalía Iglesias is currently serving a 13-year sentence for a number of crimes including tax evasion.

In a written confession seen by AP, Bácarenas claims that bribes from the illegal funding scheme involved the party leadership, and that Rajoy was aware of this yet chose to ignore it.

The party’s new leader Pablo Casado, has been losing voters to the populist far-right party Vox and is trying to distance himself and the party from the former treasurer. “Bárcenas has been condemned, and I don’t talk to criminals,” Casado asserted, to show his determined stance against corruption.