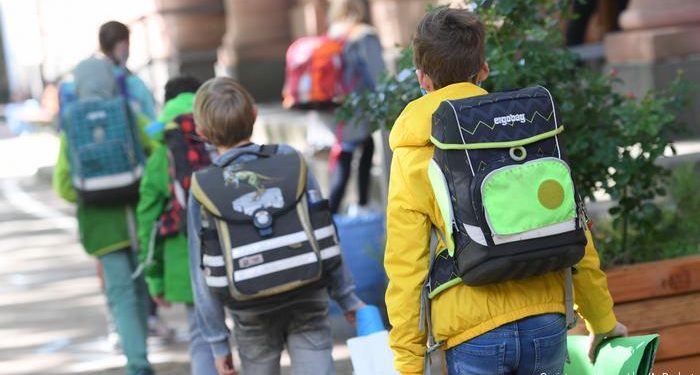 Coronavirus cases have been reported by at least 41 schools in Berlin, barely two weeks after the German capital’s 825 schools reopened.

Cases are rising across Europe, including in Spain, which registered 66,905 in the past two weeks, resulting in the continent’s highest 14-day infection rate and warnings over the risk of a new wave of deaths.

The disclosure by Berlin city education authorities that hundreds of students and teachers have had to quarantine has underlined once more how little is known about the risk of infection in school settings, despite the insistence of governments and experts, including in the UK, that reopening schools is safe given the right precautions.

The Berlin experience echoes that in some states in the US, including Georgia, and in Israel, which have recorded clusters tied to schools. According to reports in Berlin, all age groups have been affected, including in elementary schools, high schools and trade schools.

Berlin was one of the first places in Germany to reopen its schools after the summer holidays. Children are obliged to wear face coverings in the hallways, during breaks and when they enter the classroom, but they can take them off once they sit in their places and classes begin. Some critics say the measures in Berlin are too relaxed and both students and teachers should be wearing face coverings during lessons.

The situation in Spain has drawn a grim warning from the country’s health emergency chief, Fernando Simón, who told reporters: “There should be no confusion: things are not going well. If we continue to allow transmission to rise, even if most cases are mild, we will end up with many in hospital, many in intensive care and many deaths.”

More than a quarter of these new infections have been in Madrid, which was at the centre of the country’s crisis in March and April. “We can’t say that the epidemic is out of control at a national level, but there are some specific places where it is,” Simón added, without giving further details.

Deaths have also increased across Spain, with 131 dead in the last seven days compared with 12 one month ago. About 1,400 Covid-19 patients were admitted to hospital in the last week, nearly double the figure a week earlier.

The rise in cases has prompted officials across Spain to roll out a series of measures, including asking regions to order the closure of brothels, a week after the government shut most nightlife establishments and imposed various other restrictions.

The ministry has sent a letter asking “regions to specifically act on places where prostitution is exercised, like brothels”, she told the radio station RNE on Friday. Brothels operate in a legal grey area in Spain, which made regulating their activities tricky, a ministry spokesman said.

France, meanwhile, has recorded another large jump in new coronavirus cases, by far the highest increase since the end of the lockdown in May, leading authorities to order schoolchildren above the age of 11 to wear face coverings when they return to school in just over a week in an attempt to halt the spread of the virus.

The new policy marks a toughening of measures as coronavirus infections pick up pace in France, with 4,700 new cases reported on Thursday, a post-lockdown record.

“Use of masks will be systematic inside from middle school and not only where there is no social distancing. But outdoors, it’s a local decision,” the education minister, Jean-Michel Blanquer, said in a TV interview late on Thursday.

The French health ministry reported 23 additional deaths and 4,586 new infections over the past 24 hours on Friday. There are currently 266 clusters under investigation, and 31 French departments are deemed to be in a situation of “moderate or significant risk”.

In its weekly summary for 10-16 August, also published on Thursday, Santé Publique France noted the number of new cases had risen 42% on the previous week and there was a “strong progression in the circulation of the virus especially among young adults”.

The Austrian ski resort of Ischgl, which became one of Europe’s coronavirus hotspots early in the pandemic, has announced it will ban après-skipartying next season.

Thousands of international holidaymakers became infected in Ischgl, in the western Alpine state of Tyrol, around early March, then brought the virus back home. Many of those have filed legal complaints, blaming local authorities for not acting quickly enough – a charge they deny – to shut bars where the virus spread during drink-fuelled partying after skiing.

“There won’t be any après-ski partying as we know it next season,” the Paznaun-Ischgl region’s tourism association said.