Coronavirus: fears of a potential second wave rise across Europe 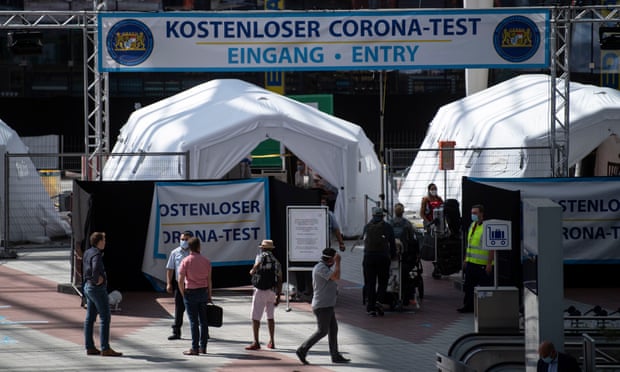 The head of Germany’s disease control agency has blamed negligence for a worrying rise in cases in the country, while the World Health Organization has counselled against treating Covid-19 as a seasonal phenomenon or talking about waves of the virus.

The warnings came as Madrid’s regional government imposed new restrictions to halt the spread of the virus in and around the Spanish capital, and the German foreign ministry advised people not to travel to the hard-hit Spanish regions of Aragon, Catalonia and Navarre.

On Tuesday, Lothar Wieler, the head of Germany’s disease-prevention agency the Robert Koch Institute (RKI), said the surge in cases seen over recent weeks was down to people failing to follow guidelines and take the necessary precautions.

Over the past seven days, Germany has registered an average of 557 new cases a day, up from around 350 in early June. At the pandemic’s height, Germany saw over 6,000 cases a day.

“The new developments in Germany make me very worried,” Wieler said. “The rise has to do with the fact that we have become negligent.”

Germany has fared better than many of its neighbours in suppressing Covid-19, but Wieler urged citizens not to squander the progress and said the virus had to be stopped from “spreading rapidly and uncontrollably” once again.

“It’s in our hands how the pandemic evolves in Germany,” Wieler said, calling on Germans to stick with prevention measures such as washing hands and keeping a safe distance.

Face masks should be worn not only indoors, but also outdoors, if the recommended 1.5-metre (5ft) distancing cannot be maintained, he said, in a subtle update of the prior advice.

The RKI chief said Germans bringing the virus back from their summer holidays was one reason for the surge in cases, but he also pointed to outbreaks happening at workplaces and open-air parties.

“We don’t know yet if this is the beginning of a second wave but of course it could be,” Wieler said. “But I am optimistic that if we follow the hygiene rules we can prevent it. It’s up to us.”

The WHO, meanwhile, urged people to stop looking at the pandemic through a “flu lens” and cautioned against talking about waves.

“Season does not seem to be affecting the transmission of this virus,” said a spokeswoman, Margaret Harris.

She said that while some of the hardest-hit countries – such as the US and Brazil – are currently in different seasons, there “seems to be this fixed idea about this virus being seasonal”.

Harris also warned against thinking in terms of virus waves, adding: “It’s going to be one big wave. It’s going to go up and down a bit. The best thing is to flatten it and turn it into just something lapping at your feet.”