Coronavirus crisis in Israel: Demonstrations to save or trample democracy? 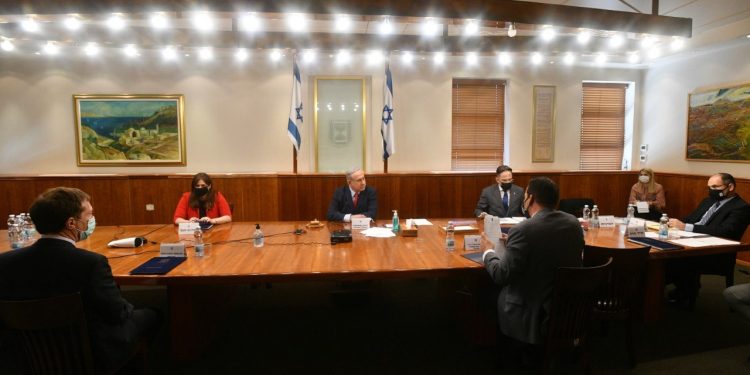 The demonstrations in Israel against Prime-Minister Netanyahu’s rule and management of the coronavirus crisis continue almost daily and specially on Saturday evenings outside his residence in Jerusalem.

The demonstrations are spontaneous and comprise young and old people from all walks of life who protest against a Prime-Minister who has been indicted on charges of corruption, fraud and breach of trust, while the country is facing the worst economic crisis in its history, with about 20 % unemployment because of the corona crisis.

At today´s (2 August) cabinet meeting, Netanyahu devoted most of his remarks to criticize the protestors and accused them of violence and spreading the virus by not respecting social distancing rules.

“I condemn any kind of violence,” he said without mentioning that rightist hooligans are behind most violence.   “It has no place, on any side, and we have zero tolerance for any display of violence or any threat of violence, from any side, toward anyone.” In fact, the police have also used excessive force against peaceful protestors.

“However, here, in the name of democracy, I see an attempt to trample democracy,” he claimed and recalled the demonstrations against late Prime-Minister Ariel Sharon’s unilateral disengagement from Gaza in 2005.  He referred to former Supreme Court President Aharon Barak, who had expressed himself against the blocking of roads.

In fact, those demonstrations were violent, by settlers who opposed the dismantlement of the illegal settlements, and cannot be compared to today’s demonstrations against Netanyahu and his government.  The right to demonstrate peacefully is a fundamental right in every democracy, especially in times of crisis.

Artists have also joined the protests amid calls to censor artistic freedom. An installation was erected last week at a central square in Tel Aviv, showing the “Last Supper of Jesus”, with Netanyahy as the only diner, eating the Israeli cake. For the artist, it symbolised the end of Israeli democracy.

Instead of recognizing the right to demonstrate, Netanyahu added fuel to the fire by claiming that “these demonstrations are being fueled, especially by the mobilization of the media the likes of which I cannot recall. They are being encouraged. They are being allowed to paralyze neighborhoods and block roads in complete contravention of what was accepted in the past.”

Netanyahu took credit of Israel’s containment of the first wave of the coronavirus when Israel was ranked among the most successful countries in fighting the pandemic. However, since the lockdown measures were lifted, without any effective system in place for testing and tracing, the country has been hit by a resurge in new infections, without anyone in the government taking responsibility for it.

In a failed attempt to calm the protestors and buy the voters in elections that cannot be excluded despite the crisis, he promised cash grants to every citizen and child in the country, without setting any criteria, to “stimulate” the economy. The decision was taken against the advice of the ministry of finance and economy professors.

In a late attempt to coordinate the anti-pandemic measures, the government appointed last week Professor Ronni Gamzu, a hospital director and former director-general in the Health Ministry, as National Coronavirus Project Director. His first task will be to put some order in the confusing measures until know and streamline the testing and contact tracing system.

Benny Gantz, the defence minister and “alternate” Prime-Minister, who is supposed to replace Natanyahu in November 2021, said that “the right to protest is the lifeblood of democracy and violence is the erosion of the foundation of democracy.” He addressed the widespread demonstrations and called on the police to protect the protesters from violence.

According to the elaborate agreement between the parties of Netanyahu and Gantz, the two parties formed a national unity and reconciliation government during the coronavirus crisis. However, Netanyahu is exploiting a loophole in the agreement and opposes a two-year budget. He has hinted that it might not be possible to adopt even a more limited state budget in time.

In that scenario, the parliament will be dissolved by end August and new elections might take place already in November, the fourth ones in two years at Netanyahu’s whim. He is still hoping that he might avoid the trial which is scheduled to restart in January next year, with three session per week. If the trial takes place, the Supreme Court would probably have to suspend him from governing the country.