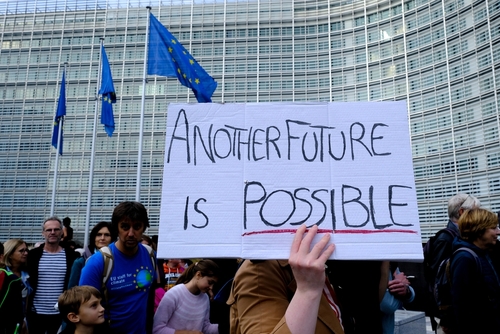 Brussels (Brussels Morning) In a bid to deliver on the European Green Deal and meet the 2030 climate targets, the EU is seeking to invest 832 million euro in technologies such as clean hydrogen and sustainable aviation fuels.

The announcement came yesterday under the auspices of the COP26 in Glasgow when the European Commission unveiled its partnership with Bill Gates, the founder of Breakthrough Energy, and the European Investment Bank (EIB). Every euro of public funding is expected to leverage three times that amount in private funding, thereby ensuring that the 832 million euro total is available for investment in EU projects ranging from clean hydrogen, sustainable aviation fuels, and direct air capture to long-duration energy storage.

Funding for the partnership is envisaged from Horizon Europe and the Innovation Fund within the framework of InvestEU. The Breakthrough Energy Catalyst Programme will mobilise equivalent private capital and philanthropic funds to finance the selected projects. The partnership is also open to national investments by EU member states either through InvestEU or at project level.

The agreement with Breakthrough Energy runs from 2022 to 2026 with the aim of speeding up the deployment and commercialization of clean innovative technologies.

Apart from investments in hydrogen and potential mixed fuels for aviation, this “venture capital” will be directed towards a portfolio of EU-based projects with high potential, including direct air capture and long-duration energy storage.

“I cannot wait to see the technologies coming to the market. The EU-Catalyst partnership is another step on the way to making Europe the first climate neutral and climate innovation continent”, Commission President Ursula von der Leyen declared.

The fund will target technologies with a recognised potential to reduce GHGs emissions, the Commission stated, especially those currently deemed too expensive to get to scale and compete with fossil fuel-based technologies.

However, the European Environmental Bureau (EEB), a Brussels-based NGO, has voiced some reservations about the EU’s real commitment to decarbonise critical sectors of the economy.

“Working on public fund issues, I’d rather say that the Commission and the EIB must step up when it comes to act now, for instance by not allowing projects including fossil fuels to be funded by the Modernisation Fund”, Riccardo Nigro, Campaign Coordinator at the EBB told Brussels Morning.

The Modernisation Fund was established to promote investments in small-scale energy projects, improvements in energy efficiency, and the modernisation of energy systems in lower-income EU countries with a GDP per capita at market prices less than 60% of the EU average.

According to Nigro, it was regrettable that the “very untransparent” Investment Committee, part of the Modernisation Fund, had given the green light for at least two projects that include fossil gas — Cogeneration for District Heating and Cogeneration for Energy and Industry — and one waste-to-energy, to be developed in Poland.

“Instead of continuing thinking of what can be done in the future through new investments and new technologies, I’d rather push them to act now with the tools we have at hand. All fossil fuels should be kept in the ground starting from today, if we really want to reach the climate and environmental targets set by the EU“, Nigro stressed.

During a brief press conference, Bill Gates said that the fund was intended to reduce the “green premium”, an estimated trillion sum a year cost gap between often cheaper fossil fuels and the more expensive renewable technology.

“Innovation can bear a lot of the burden of trying to reduce the affordability gap to do these things”, he noted.

“The time for action is now. The climate challenge requires us to invest in high-risk innovations and to eliminate the ‘green premium’ involved in commercialising new technologies”, von der Leyen observed.

COP2 for a selected few

The climate summit may have brought state and industry leaders together, but Greenpeace has condemned COP26 for lacking broader representation and its inaccessibility, accusing it of being restricted to a select few: “This summit will exclude many Indigenous Leaders, small island nations and climate activists from climate-impacted countries at a time when their voices need to be heard more than ever”, the NGO declared.

Postponed from 2020 to 2021 because of the COVID-19 pandemic, COP26 marks the first summit of its kind since the 2015 Paris Agreement, the expectation being that signatories will significantly ramp up their emissions reduction pledges.