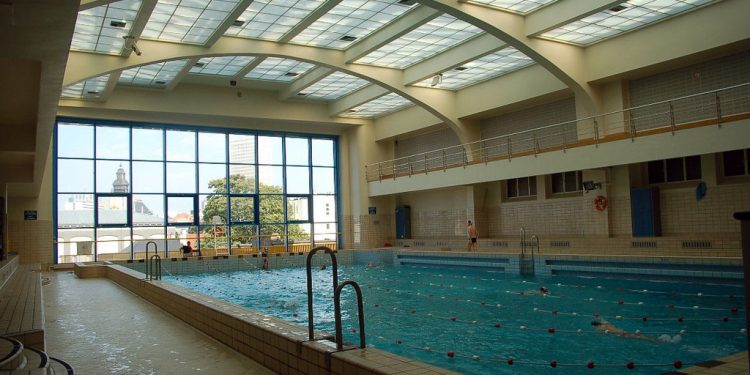 Baden van het Centrum was inaugurated in the 1950s by the City of Brussels. As part of the sustainable neighbourhood contract for the Marolles, the building on Vossenplein will undergo a renovation. An architect has been appointed and works will start in 2023 at the earliest.

The City of Brussels has appointed the architectural firm Pierre Hebbelinck to draw up the plans for the renovation, restoration and redevelopment of the Baden van het Centrum.

According to a report by BRUZZ, The project includes renovated and rehabilitated sports equipment, a renewed cafeteria and a complete renovation of the public showers. The architect is also aiming for a project in which the swimming pool can remain open as long as possible during the works.

Finally, a study will also be carried out on the use of the terrace on the fourth floor as an outdoor space for the cafeteria. The interpretation of the multi-purpose spaces has yet to be determined. To do this, the architectural firm says it is looking at the needs in the neighbourhood.

Heritage to be preserved

The intention of the renovation is that the heritage value and the functions of the building are not affected. “By strengthening the social role of public showers and making the Baden van het Centrum even more accessible to everyone, we want to give a central role to this emblematic sports infrastructure in the heart of the Marolles,” says Benoit Hellings (Ecolo), Alderman of Sport and Climate of the City of Brussels.

The swimming pool in the Marolles welcomes more than 200,000 swimmers every year. About 14,000 ‘social showers’ are also taken every year.

Already in 2020, a master plan identified the needs and a vision for this renovation project. Based on the plan, a competition was launched to designate an architectural firm.