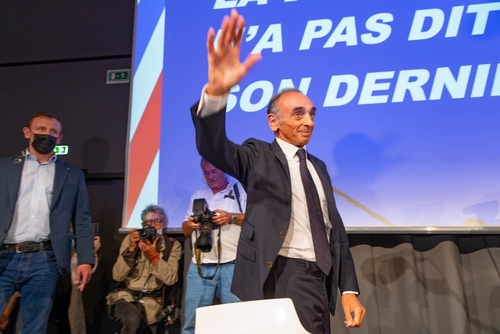 Brussels (Brussels Morning) Fabian Roussel, the communist candidate for next year’s French presidential elections, is seeking to broaden the country’s hate speech laws, in an effort to disqualify a right-wing rival, the controversial polemicist Eric Zemmour from the race. Roussel wants to make politicians convicted of racism or incitement to racial hatred, such as Zemmour, ineligible to contest presidential elections.

Roussel, the leader of France’s Communist Party (PCF), told Radio J France on Sunday that he wants to broaden the Gayssot Act’s provisions with regard to the use of racial discrimination and hate speech. He specifically cited Zemmour, the notorious right-wing pundit, columnist and now declared candidate for next year’s presidential elections, as a racist.

“The Gayssot law condemns anyone who makes racist, xenophobic, anti-Semitic remarks”, Roussel declared. “Today judges decide to make ineligible politicians, elected officials who have, for example, embezzled funds and I think we should have the same sanctions for inciting racial hatred, racism, anti-Semitism.”

Condemning Zemmour’s his track record of legal proceedings for racial discrimination, the PCF leader called him a “revisionist who rehabilitates Pétain.” Broadening the Gayssot Act was vital, Roussel said, since “the values of the Republic and national cohesion” were at stake. “Shame on those who roll out the red carpet for this man”, he added.

In ostensibly championing the value of freedom, Zemmour is shaping his campaign for next year’s elections to appeal to French nationalist voters. He has declared that he wants to abolish the Gayssot Act because its provisions “prevent the freedom of historic research.”

“I would like to point out that the vast majority, if not all, of French historians protested against these memorial laws. Memorial laws inhibit us from the freedom of history”, he claimed. “French historians and even Mrs [Simone] Veil, regarded the Gayssot act as a communist law,” he told French media.

The Gayssot Act of 1990 is one of several European laws which prohibit Holocaust denial. Its first article states that “any discrimination founded on membership or non-membership of an ethnic group, a nation, a race or a religion is prohibited.”

Roussel attributes his condemnation of Zemmour to his history of criminal convictions related to discrimination during his career as a columnist.

Zemmour has been charged with a range of discriminatory offences. In 2010, he was the subject of seven cases—acquitted in four, three cases still awaiting trial.

In 2011, a Paris court sentenced him for inciting racial discrimination after he publicly stated that employers have the right to ask temporary employment agencies not to refer job candidates to them who happen to be black or Arab. In 2019, Zemmour was again the subject of proceedings, having claimed that Nazi-collaborator Phillipe Pétain had “saved” French Jews during the Nazi occupation. He was eventually acquitted in 2021.

The latest Harris poll shows Zemmour now in second place among likely presidential candidates, with 17% of the potential vote, a four point increase compared to the most recent poll in September. Marine Le Pen, previously the leading rightwing choice, dropped down to 15% and is now in third place. Incumbent President Emmanuel Macron still leads. Roussel, a virtual outsider, ranked ninth in an earlier poll.